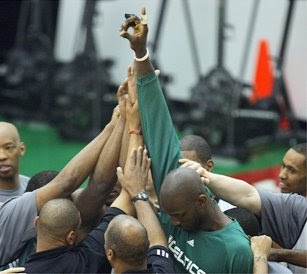 As players make their way back to Boston in preparation for Monday's Media Day and Tuesday's start of camp,  we are getting some news and quotes and Celtics fans are getting excited for this season to start.  First, Nate Robinson is looking forward to having a full training camp with the Celtics.  Nate joined the Celtics midyear and in spite of having to learn the system on the fly, he had some nice moments including the Shrek and Donkey show in the playoffs.   The point guard spot is tough to learn with a crash course but Nate's performance, although inconsistent, was enough to get him a chance this season to really fit in and help the team.   Here is Nate's take on it.


“For me to get to training camp early, it’s going to just help me out with knowing exactly what Doc wants from me, how to play and get in where I fit in, which is me bringing energy,” Robinson said. “I don’t really try to do too much and I’m going to play my game.”

We are finally getting just a little info on Kevin Garnett.  For most of the summer he has been completely out of the headlines other than the trip he took to China for his new shoe endorsement.   At yesterday's golf tournament, Danny Ainge mentioned that KG is primed and ready for camp.   KG's health is a major concern for Celtics fans.   Coming into camp last season, he wasn't the dominant KG of past seasons.   He is a year removed from the knee injury and surgery that sidelined his 2008-09 season and as the year went on last season, we saw KG slowly returning to his old form.   I'm expecting a very motivated KG who is going to once again be a force in the paint.  Here's what Danny had to say about KG coming into camp.

"I think Kevin needed some rest, some time off, and he took it, but he's ready for camp," said Ainge. "He's in much better shape than he was last year in training camp. I think that KG got better as the year went on last season and we saw him moving much better in the playoffs than in the regular season."

And added to that Danny proclaimed that this team is the most talented that the Celtics have had in awhile.   And Tony Gaffney is ready for camp.   I really like this kid.  He is long and athletic and a very, very good defender.  Seems to me he is just exactly what we need behind Pierce and Daniels at the 3.    Awhile ago he posted this:

How can you not like a kid with that kind of attitude?  Here is what he had to say yesterday about guys coming into camp along with Doc Rivers' take on the guys coming back:


"The environment in the locker room right now, it's something special," said Gaffney. "I know there's a lot of talk about the Miami Heat right now, but we're a team that's determined and looks ready to get this thing going."

Gaffney raved about the shape that players are arriving in Boston in, stressing how excited everyone is to get this season started. Rivers said he wanted his players to take it easy this offseason given the extended 2009-10 campaign, but admitted that guys were arriving in better shape that he could have imagined.

And Big Baby, who has been entertaining Celtics fans all summer with hysterical videos and photos is still at it.  Now he posted his Ayo baby face with a warning to "Watch your girl!!"  Hide the women and children (especially those standing on the sidelines when Big Baby hits a game winning shot!) Here comes Big Baby!!

The Celtics have already waived Oliver Lafayette but there still should be considerable competition in camp for spots on the team and for playing time among those are guaranteed spots.  Marquis Daniels and Nate will be working to prove that Danny made the right choice in bringing them back.   The veterans will be working to show the young guys they still have it.  The O'Neals will be vying for that starting spot.  And Delonte, Wafer, Gaffney et al will be trying to prove they deserve a roster spot and can help the team.  Should be a good camp.  I can't wait for the preseason to begin!!!