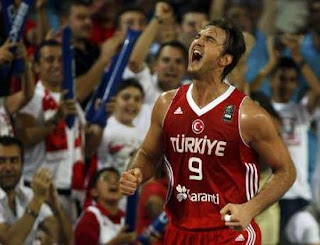 On Wednesday, Turkey rolled over Slovenia 95-68 to reach the semifinals of the basketball world championship for the first time.    The Turkish team has been playing very well behind the home crowd and could be a problem for team USA should they meet because of their size and ability to score from the outside.

Celtics rookie Semih Erden continues to play well and put in solid performances for his team.  Against Slovenia, Erden had 6 points, 5 rebounds, and 3 assists in 21 minutes of play.    A couple of his assists were eye opening.  One in particular was a left handed no look wrap around pass.   He still has momentary lapses of concentration that led to 3 turnovers on his part but I see enough potential to be intrigued about his role on the Celtics this upcoming season and beyond.   One thing he will have to get used to is the NBA goal tending rule.  A couple of times he grabbed the rebound off the rim and in the NBA, he will be called for goal tending on that move.  Through 7 games of the tournament, Erden is averaging 9.1 points, 5.1 rebounds, and 1.3 assists per game.  As you can see in the photo, he's already practicing his KG style primal scream.