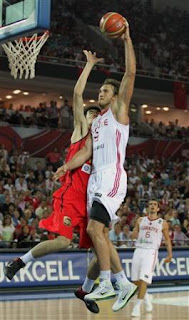 Celtics rookie Semih Erden saved the best for last as he finished Turkey's group play with a big game in their win over China.   Turkey dominated the Chinese team throughout the game and finished with an 87-40 win.   The Chinese team had no answer for Turkey's big men inside and they pretty much did as they pleased around the basket.

Erden finished with 18 points on 9-11 shooting.  He also had 12 rebounds (4 on the offensive end), 3 assists, and 3 blocks in 27 minutes of play.   During Turkey's group play, he has gotten a little better with each game and in this game, he was very impressive, albeit against a team that had no serious inside presence.  Turkey finished group play undefeated.