What the Hell Happened to...Darren Daye? 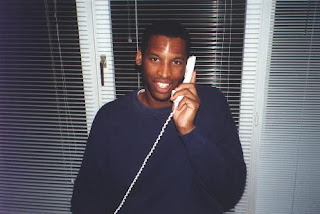 In this week's What the Hell Happened To, we look back on the career of #20, Darren Daye.

Daye was taken in the 3rd round of the 1983 draft out of UCLA and was the former McDonald's High School MVP of the inaugural 1979 game.  He was drafted by the Bullets and played his longest tenure for any NBA team, sticking with them for his first 3 seasons.  After being waived by Washington at the start of the 1986 season, he'd sign with Chicago and play 1 game and 7 minutes with the Bulls, allowing him to be able to tell everyone he played with Michael Jordan.  After being waived by the Bulls, he signed on with the Celtics three days later in December of 1986.


Here was the famous Zander Hollander scouting report on Daye for the 1986-87 season, in which Darren would be waived by Washington and then picked up by the Celtics:

Bullets drafted him 57th overall in 1983 out of UCLA...Averaged 8.7 ppg in 15 minutes per night...Disturbingly deficient at free-throw line...Wouldn't know a rebound if it hit him in the face...Has good offensive moves to basket, however...Seems to be one of nameless, faceless bunch of players who hangs around NBA for a few years and then just disappears...Just nothing spectacular about him. 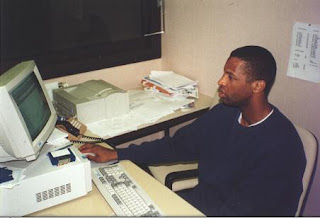 He'd play with the Celtics for the 1987 and 1988 seasons.  In 1987 he actually was forced to appear in 23 playoff games (I'm still convinced that Celtics team had the worst bench of any 1980s Finals team by a landslide.  I'm also convinced if that bench had any pulse whatsoever they could've won the title.  That was a dreadful bunch).  In February of 1988 Daye would be waived, expendable mostly because of the acquisition of Jim Paxson. 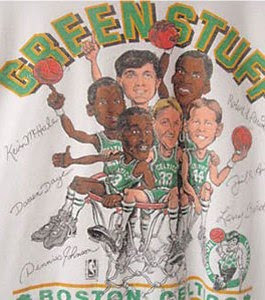 Speaking of Paxson him and Daye also shared something in common: they were both featured on caricature t-shirts of the Celtics called "Green Stuff" that was produced by the Massachusetts State lottery.  As you can see it was 6 Celtics "stuffed" into a basket; the legendary starting 5 and a 6th man.  The one with Paxson came out the next year and I was obsessed with it, at 10 years old.  In fact my parents wrote a letter to the Massachusetts State Lottery explaining how we lived in NY and I was a huge Celtics fan and I really wanted that shirt but couldn't find it anywhere (this was pre-internet).  They were nice enough to mail us a free shirt.  Basically imagine the same shirt to the left but instead of Daye it had Paxson [I loved the Paxson acquisition back that season; I really thought he was the missing piece and would put the Celtics over the top.  Of course being a kid infatuated with basketball cards and seeing his numbers in Portland made me that way.  Too bad Paxson publicly complained about Larry Bird’s shot selection and commented that Bird was "hogging the ball." End of Jim Paxson as a ballplayer, and he'd incredibly go on to be known as "John Paxson's brother" even though John wasn't half as talented as Jim, a former All Second NBA team selection.] 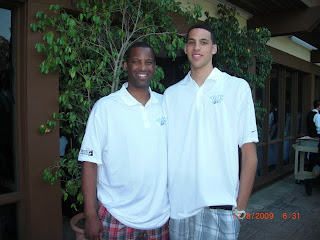 After the NBA, Darren would go onto play in Italy, France and Israel up until the 1997 season when he retired.  For his NBA career he averaged 6.8 ppg.

I must admit: I never cared for Daye's game.  He was part of that brutal bench brigade in 1987 and 1988 which consisted of corpse, after corpse, unable to fill in for the starters with any quality minutes.  Frankly I don't think his son Austin will amount to much either.  (Btw is Darren really 6'8?  Look at that picture with Austin who is listed at 6'11.)  I wasn't really impressed with him in Detroit at all.  Perhaps he'll get better, but I don't think he'll ever be a star. 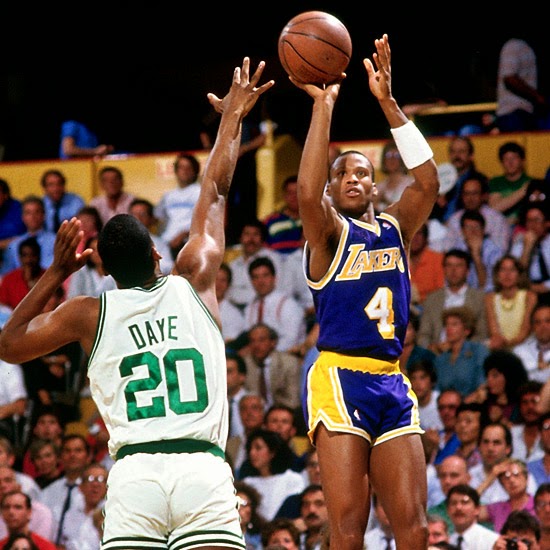 As for Darren, today he works for Tax & Financial Group as a financial adviser.  One of his responsibilities is Project Access, which assists low-income families in affordable housing to achieve self-sufficiency.  See just like Greg Kite, these guys from the 1980s have to keep on making a living (unlike Michael Stewart who seems to live the good life of lounging).  I wonder if Greg and Darren exchange the secrets of being a successful businessman.  I bet they wish they played in the late 1990s, early 2000s.

Of course if Austin Daye's name was actually Austin Birdsong, I could totally see Otis living off his son's new found wealth.  Kudos to Darren for still making his own money.