Finally, A Wrong is Righted - DJ Inducted into the HOF 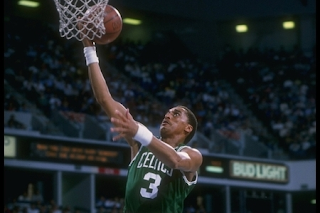 The Hall of Fame is finally doing the right thing as Dennis Johnson will be inducted into the Hall on Friday, August 12.   It is a travesty that it took them this long.  His was clearly a Hall of Fame career and for whatever reason, they waited until after he was gone to realize it.


I watched DJ all through the 80's and he was one of my favorite players. He was always so clutch and when the game was on the line, there was none better, including Larry Bird. But playing on a team with Larry, Kevin and Robert, he never got the accolades that were due him. One play has always stood out in my mind as characterizing DJ's career. It was the play in the 1987 playoffs where Bird stole the ball and passed it underneath to DJ for the layup.


What has always impressed me most about this play wasn't the steal or even DJ's presence of mind to cut to the basket for the pass and layup when Larry got the ball.  Something else in that play caught my attention on that day.    And, it has always remained in my mind as being representative of DJ and the way he played the game. Watch DJ after the layup. There was 1 second left on the clock and DJ didn't turn to celebrate with his teammates. He turned immediately to cover the inbound pass. Now that is a professional!


I get choked up just thinking about it. How many players in this league would have thought defense after a play like that and immediately turned to cover the inbound pass with 1 second on the clock?  That was a testament to DJ's greatness. Not the layup, not the many steals or clutch plays down the stretch of games, but the presence of mind to turn to cover that inbounds pass after the game winning shot he had just made.


During his 13-year playing career with the Seattle SuperSonics, the Phoenix Suns, and the Boston Celtics,  DJ  established himself as one of the best defensive guards in the league.   He was named to five All-Star teams and nine straight All-Defensive Teams. He was a member of three NBA championship squads with two different teams.    He was named Finals MVP in 1979 as he guided the Sonics to their first championship.  He spent 7 years with the Celtics as a glue guy who bound the team together as they won championships in 1984 and 1986.


Dennis Johnson retired at the  age of 35 after the 1989-90 season and was the 11th player in NBA history to amass more than 15,000 points and 5,000 assists.   In  a Sports Illustrated article,  Larry Bird, who was not known to lightly toss around compliments, called DJ "the best I've ever played with."  And considering the Celtics legends that Larry played with, that is saying a lot.

After his playing career ended, DJ  stayed on as a scout for the Celtics and became an assistant coach in 1993.   He was named as an assistant with the Los Angeles Clippers in February 2000.   He also was a head coach for the Austin Toros in the NBA Development League. Dennis Johnson died of cardiac arrest after leaving a practice session with the Toros on Feb. 22, 2007. He was 52 years old.  The world lost a great player, a great coach,  and a great man on that day.

It is a happy day that Dennis Johnson will finally be inducted into the Hall of Fame,.  But every person who has a vote should hang their heads In shame because he belonged there years ago. Rest in peace, DJ.  You are finally where you belong.

Join in the great discussions on the Celtics Green Forums.