Everything I Ever Needed to Know I Learned on Twitter

It's amazing how much you can learn by reading through Twitter on any given day.  Here are a few of the things I learned on Twitter today.
First, we learn that Jermaine O'Neal is working out with Jared Dudley and looking good.   This is good news.  It will be great if he comes into camp in shape and motivated. 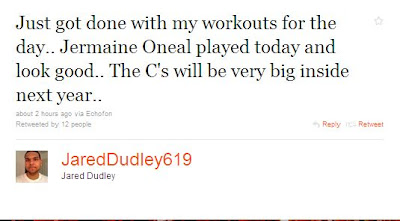 Next, I learned that Big Baby has way too much time on his hands and that he is working on a second Douggie video to challenge Nate Robinson to a Douggie off of sorts.   Too funny!   Here is a link to his video if you have the courage to watch it.

And I learned that the full schedule is coming out tomorrow.  Will be interesting to see how many Celtics games will be televised.  We know that the 3 amEgos in Miami will have the max of 34 nationally televised games. The games I'll be looking for are the Fakers, Heat and Magic. 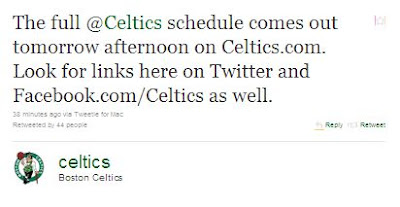 Next up, I learned the date and time for Shaq's press conference.  He is always good for some good quotes and is always entertaining.  Tanguay said (also on Twitter) that one of the questions that he plans to ask is whether he and Perk can get along on the team.   This is must see TV. 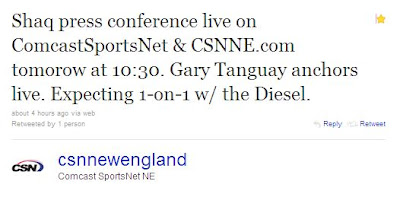 Dennis Johnson will finally be inducted into the Hall of Fame on Friday.  It's about time!  It is a travesty that he was not inducted while he was alive.   He deserved it and I'm very glad that it's finally going to happen even though it took way too long.

Perhaps the biggest news of the day was tweeted by the Globe's Gary Washburn.   There have been rumors of Sheed's return floating around after Shaq said that he wanted Sheed to come back for one more year.  But Gary's tweet put an end to all the speculation.  I think this is good news.  I'm really hoping that Danny can use his retiring contract to bring in that long defensive 3 that the team needs. 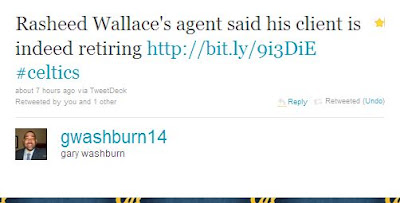 And there you have it.  All you need to know about the Celtics from today's Twitter.    It's exciting that JO is looking good.  I can't wait for the season.   Tomorrow's going to be a big day with Shaq's press conference and the schedule coming out.  And, of course,  it will all be reported on Twitter.
Don't forget to check out the Celtics Green Forums!