It's time to bring back Big Al 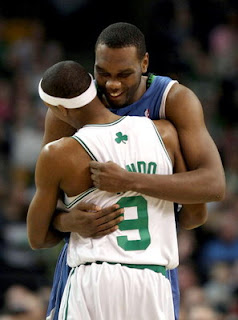 Reports are that Minnesota simply wants cap relief for Al Jefferson. They'd trade him to the Mavs tonight for Eric Dampier's contract, but Dallas is holding out and wants Minnesota to take a couple bad contract back in return. The Jazz are also in the mix with Boozer's trade exception. Would bringing in Al Jefferson be a large financial undertaking for Wyc? Most definitely. But the time is now to win. We need more ammo to take on the Heat and revenge the Finals defeat to the Lakers. Jefferson didn't have the strongest of years as he recovered from knee surgery, but as Doc has said many of times (in regards to KG), it takes a year to come back from knee surgery. Jefferson is only 25 and with Rondo would form our future.

I wanted Michael Beasley, because he was being given away for a song, but that ship has sailed. Al Jefferson would be a steal to reacquire. He's only available because the Minnesota GM is an idiot. One could argue that it would look bad for the Wolves to trade him back to Boston, but Kahn hasn't avoided looking bad much up to this point. The Mavs and Jazz are both in the Western Conference with the Wolves, so one would think it would behoove them to move Al back East. If the Celtics have to sweeten the deal with a first or two, because of the KG trade factor, so be it. Some combination of 'Sheed, Lafayette,  Gaffney and one of Davis or Perk would get it done. Or Danny could acquire a trade exception from Memphis for Tony Allen and use that instead of Davis or Perk. The point is a young 20/10 guy is available for the taking. A player with the best post moves in my opinion since McHale and Hakeem. He also can board and I really don't want to hear about his defense. He's been stuck on putrid teams, but put him with KG and in our system and you'd be pleasantly surprised. This is a no brainer. Pounce Danny. Pounce.