The Kobe/Jordan debate is ridiculous 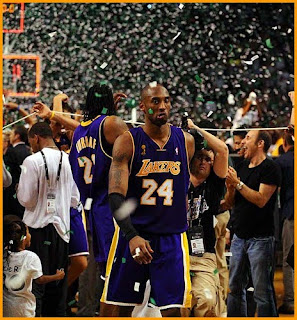 We live in a "what have you done for me lately" society. People have short memories and often think whoever is hot at that moment is the greatest ever at whatever they do. No segment of the population is guiltier of this than sports fans. We proclaim everything as the “greatest game" or " greatest player". We are so quick to judge everything the day after it happens without putting it in any kind of context. This is exactly what is happening right now with Kobe Bryant.

Look, as much as I hate the guy, Kobe is one of the 10-15 best players of all time. However, to compare him to Jordan is silly. What's even more ridiculous is making all of these comparisons before the Finals. If Kobe loses that will make him 4-3 in championship series’, and 1-2 without Shaq. That will also mean he has lost twice to his most bitter rival and three times as a favorite.

For anyone who forgets, Jordan was 6 for 6 in Finals appearances. Why are we so eager to anoint everyone the next Jordan? More than likely there will never be another player like him because the game has changed so much.

Even if Kobe wins the title this year, I don't think the Jordan comparison is applicable. Kobe spent the first part of his career as a secondary player to Shaq. Also, please don't compare Scottie Pippen and Shaq. Pippen was a great player and one of my favorites players to watch, but he wasn't Shaq. Shaq is one of the most dominant players of all time and was in his prime during those title years. Also, I think we can all agree that it is much easier to win a title with a dominant big man than it is with a swing man.

At any rate, the simple fact is it's ridiculous to make statements like Kobe is better than Jordan when the facts don't back them up. The truth is if Kobe loses to the Celtics again those same writers will talk about how he has lost 3 Finals and is overrated. They will go right back on the Lebron bandwagon again. I wish people could just be more patient. These debates are fun but only when they make sense. Let's hope the Celtics crush the Lakers and end this debate once and for all.