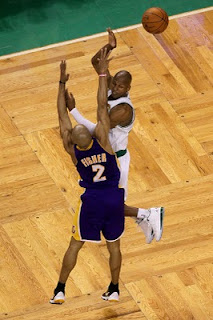 The Lakers took Game 3 of the NBA Finals - retaking home court advantage with a 91-84 road victory in Boston. They now lead the series 2-1.

After receiving a plethora of criticism in the first two games - Kevin Garnett finally turned in a solid performance. He finished with 25 points on 11/16 shooting. For the Lakers, Lamar Odom answered similar criticism - passing his combined point total from the last two games with 12.

Despite the explosive effort from KG, the Celtics struggled to keep up with the Lakers. Their problems being tied directly to Ray Allen's. Ironically, after posting the greatest shooting night in Finals history in Game 2, Ray was held to a disastrous 0/13 shooting tonight - nearly reaching the worst shooting performance in finals history. While he made 8 three-pointers on Sunday, he missed 8 tonight. Most heart-wrenching was a crucial miss from behind the arc with the C's trailing by 4 and under a minute left.

Like in Game 1, LA was able to again out-rebound the Celtics, 43-35. Including an 11-8 advantage in offensive boards. The two teams shot the same amount of free throws this time around - each attempting 24. However, LA was able to take better advantage of their trips to the line - shooting 88% compared to Boston's 67.

Kobe Bryant and Derek Fisher led the Lakers offense to the W. Despite a poor shooting percentage (making only 10/29 shots) Kobe totaled 27 points. Derek Fisher, however, deserves the most credit for the Lakers' win. He led the team to fend off a late game run by the Celtics - ending the game with 16 points.

In the third quarter, LA held onto the double digit lead they built in the first half. Yet, Boston continued to chip away - cutting the deficit down to as little as 4. After trailing by almost 20 points at one point, they managed to end the third quarter only down by 6. Their late quarter burst of energy continued opening the fourth. Behind Big Baby, the Celtics pulled within 1. However, the Lakers withstood the run and opened up their lead to as large as 6 behind Derek Fisher's 11 fourth quarter points. Boston continually pulled within a possession but could not get a crucial stop or score.

The Celtics started the game on fire behind Garnett's 3 field goals in the first minute. After Boston built an early 7 point lead, Phil Jackson called a timeout to regroup. The timeout turned out to to change the look of the first half and the game. The Lakers came out of the break a different team. They preceded to roll over the Celtics - finishing the 1st quarter on a 21-5 run to take a 9 point lead. LA started the second with the same spark and built a lead as high as 17 - ending the half up by twelve behind Kobe's 16 points.

Opening their home stand with a loss makes the Celtics' job much harder. To give themselves the greatest chance they must hope to win the next two straight against the Lakers. Heading back to LA down 3-2 and hoping for a championship would be a near impossible task. Game 4 will take place Thursday June 10th at 9pm.