Believe In Sheed... You Have To 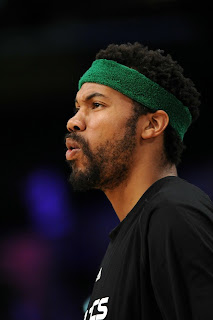 This is it - Game 7. Rasheed Wallace will be starting for the injured Perkins. For all the 'Sheed Haters (myself included) now isn't the time. There's no other choice. This is it. The Celtics' bid for a championship rests on the shoulders of the team's most inconsistent and head scratching player, Rasheed Wallace.

Since the Cleveland series, he's stepped up big. He's played solid interior defense and has shown the energy, effort and hustle that Boston fans were desperately aching to witness months ago. In these finals, he's particularly been effective in a key match up against the length of Gasol.

Now the stage is a lot bigger, he'll be a member of the starting five in Game 7 of the NBA Finals. He appears ready for the challenge. “Just hoop,” he said. “This is what I came here for. I love the situation”. While Rasheed's proved in these playoffs that he can be effective on the floor. It's a matter of staying there that's a concern.

“...He has been in foul trouble most of the games,” Doc Rivers said. “So, you have to go into the game anticipating that, really, and being ready to adjust if that happens.” Avoiding the whistle will be key for Sheed and the Celtics. It should come as no shock to any NBA fan that Sheed is averaging a foul per every five and a half minutes of play. Yet, he desperately needs to avoid falling into that sort of trouble tonight.

Without Perk, the Celtics are left dangerously thin. Big Baby is the next best option. However, despite his hustle and energy, he doesn't have the size to effectively contest the Lakers' bigs. That leaves just Scal and Shelden. In order to pull off the upset of a lifetime (not even Vermont thinks the Celtics will win tonight) they are going to need Sheed to stay on the floor. As strange as that may have sounded 3 months ago.

“I remember going to Detroit this summer,” Ray Allen said. “Rasheed is going to help us during the playoffs, and this is the playoffs. This is as good as it gets right here. I look forward to it. There’s history going to be created tomorrow whether it’s good or bad for us. We have opportunities to make that determination.”

This is the exact type of situation 'Sheed came to play for. The exact scenario that he was apparently saving his energy for in the regular season. The chance to win a world title. Now is the time for Rasheed to prove he's worth the three-year deal that had so many Celtics fans kicking themselves in the heads during the regular season.

This is a chance for every Celtics fan that defended Sheed all year long to say "I told you so". I hope they do. Believe in 'Sheed. Because, tonight, you have to.