The Water of Life was finally found 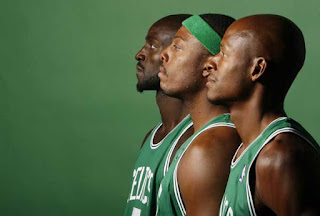 The legend says that Alexander the Great crossed the Land of Darkness in his search for the Water of Life, and that though he couldn't find his way into the darkness, his servant Andreas found the Fountain of Youth and became immortal. Many years later, Spanish Conquistador Ponce de León searched for the magic waters of eternity in the lands of Florida. It was believed then that the source of immortality would be finally found in those lands.

The Boston Celtics were left for dead after a disappointing regular season, and destiny left them laying in the sands of Florida. The analysts predicted a hard fight from the home team whose young leader, Dwayne Wade, would be able to inflict more wounds into the decaying body of the once NBA champion, the mythical Celtics. Our team looked into itself and wandered in the lands of Florida and it seemed that on one night, the captain of the ship -Paul Pierce- found some mysterious water coming from a magical place. Paul drank from it first, and delivered an incredible performance that regenerated the hopes of the crew. After him, Ray Allen also took the water and his power for long distance threat became clearer, more transparent. The Celtics became suddenly stronger and didn't have too many problems in beating the Miami Heat in five battles. The joy was back, the team had awaken from its sopor and the dreams that had faded in the previous months revisited the minds of players and fans.

Before leaving the lands of Florida the Celtics decided that the effort of the youngest players combined with the performances of two of his oldest members would not be enough to face the biggest demons that were waiting for them in the Northern lands of Ohio. They needed some extra help, some spiritual and magic hand that would make them unbeatable. There were stories of two giants that with their fierce game, and court dominance would beat their opponents by inducting fear in their eyes. The team first found Kevin Garnett, who had been severely wounded in previous quests. He drank from the fountain and walked again. But only Garnett knew how to awaken the other giant, the sleepy one. No one had been able to wake him up from his slumber in years. Garnett found Wallace and they both drank more of that healing water. Together they found the keys of youth and immortality and together -as old spiritual guru Doc Rivers repeated once and again- they defeated the self proclaimed King in six epic battles.

Now the team goes back to the place where they found the way to heal their own physical and psychological wounds. Other mighty opponents await on their way, but the team is now restored with faith and strength to overcome all past and future fears. This team knows no limits, it knows itself and is focused on its quest for a new championship for the city of Boston.