Not Quite The Same Team 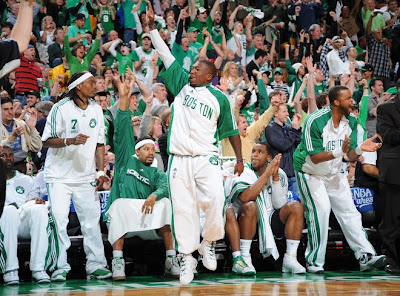 With their recent post-season run, this Celtics team has been drawing many comparisons to the one that raised Banner 17 two years ago. While hovering over the Orlando Magic, 2-0, it's easy to accept this. The starting five we see take the court now looks no different than the one from '08. Despite that, the teams do have their distinctions. "There's no comparison of the teams", Pierce said Friday, "...[the media] wants to make them similar...but it's a completely different year. New players. We're trying to develop our own identity." Looking at the two groups, you can see why Pierce would say that.

There were a lot of different faces on that '08 championship team. Remember P.J. Brown, Sam Cassell and James Posey? Those were the core members of the bench that post-season with key contributions coming from the likes of Eddie House and Leon Powe. All gone. When the Celtics won the championship, 'Big Baby' Davis was averaging 8.1 minutes per game, Tony Allen - 4.3. Since then, their post-season minutes have more than doubled. They, along with Rasheed 'TLC' Wallace, are now the face of the reserves. The major difference between the two groups comes down to experience. Cassell, Brown and Posey brought a combined 40 years of NBA experience off of the bench. This year's core has played for a combined 24 years - a good chunk of which being 'Sheed's 15. How much the veterans' knowledge was a factor in clinching a championship remains to be seen.
This year's bench is also missing Eddie House, which creates a slight alteration in game planning. While the '08 Championship team had House shooting threes, this year's team has Nate Robinson cheering from the sideline. Which strategy is more effective in the quest for greatness has yet to be determined. 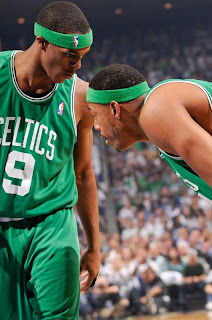 While the bench has all the new faces, the most significant difference lies in the starting five. Even though it's the same players - their roles have changed. The Celtics are now Rajon Rondo's team. While he was a valuable part of the '08 team, he can now carry the entire team on his back. A statement that can be backed up by his outstanding triple double against the Cavaliers in Game 4 - putting him in the company of Wilt Chamberlain and Oscar Robertson  In the 2008 playoffs, the point guard was averaging 32 minutes, 10 points, 4 rebounds and 6 assists. This year, he is playing almost full games and averaging more points than any other Celtic, with 17.8. He's also averaging the third most rebounds on the team with 6, behind only Garnett and Perkins.
In addition to his statistical improvements, he's become a clear leader on the team. Talking about watching film in the off-days, KG said, "We like to come in on days off, all watch the film. Rondo pretty much has the control - talking what he sees". This comment reveals the dominant role the young point guard has come to hold both on and off the court. The offense is now run through Rondo - he calls the plays. A role he didn't hold when the Celtics got their rings.
It's easy to link the two teams together and assume that since they're healthy a championship is attainable. But, as Pierce said, this team has a different identity. There are new faces, new roles and plenty of things to prove. Hopefully this group proves to be just as good as its predecessor.
Nate Picture: (Photo by Brian Babineau/NBAE via Getty Images)
Rondo Picture: (Photo by Fernando Medina/NBAE via Getty Images)