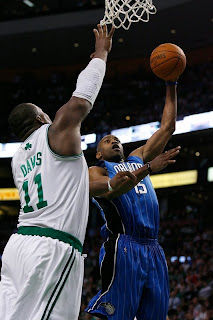 The Celtics' last loss came in Game 3 against the Cavaliers. After blowing Cleveland out on the road, Boston headed back home with all of the momentum and three days rest. LeBron and the Cavaliers proceeded to hand the Celtics their worst home loss in playoff history. In this Game 3 against Orlando, the Celtics ensured that wouldn't happen again.
Glen Davis led 6 Celtics with double figures, racking up 17 points on 5/9 shooting as the Celtics smothered Dwight Howard and the Magic in a defensive massacre, 94-71.
The Big Three showed up tonight. Paul Pierce racked up 15 points on 6/12 shooting. Ray added 14 points and Garnett totaled 10. Rondo got a double double with 12 assists and 11 points while 'Sheed chucked in 10 points.
Boston came out of the first half and bumped their 17 point lead up to 20 and never let the Magic back in it. They held a lead as much as 32 in the second half and closed things out, 94-71, in a win that is sure to destroy Orlando's hopes for a championship.

Boston completely dominated the game from the start. They opened up with a 7 point lead but the Magic were able to pull within one to make the game 7-6. However, the Celtics embarked on a 15-0 run and never looked back - taking a lead as big as 24 in the second quarter. They closed the half towering over Orlando, 51-34.
Boston has won six playoff games in a row, the hottest post-season streak since the '86 team. The Celtics now improve to 3-0 in the series and look to close things out with a sweep on Monday May 24th at 8:30pm.