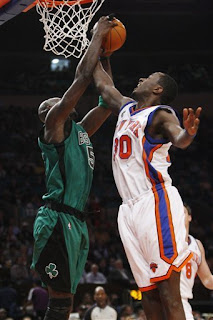 I've been a sports fan all my life and I can't remember a more frustrating team to watch than this Celtics team. You just really never know what team is going to show up on any given night. Tonight the "bored" team showed and in turn they got beaten by the lowly Knicks. Not only that, but former D league player Earl Barron dropped 17 points and grabbed 18 boards. Can you imagine what Dwight Howard is going to do to them if he gets the chance? I just had a slight heart attack.

No one really played well for the Celtics except for Michael Finley who hasn't missed an open jump shot in about 12 seasons.  Ray was hitting early, but as usual they stopped going to what was working. The defense looked horrendous, standing around watching the Knicks shoot open jumper after open jumper.  Defensive rebounding continued to be terrible for the Celtics. It's almost as if they go out of their way NOT to rebound.

Gallinari's big 3rd quarter and 31 points in the game were huge for the Knicks. It's amazing how much Bill Walker's role has changed now that he is on New York. The guy has the green light to shoot whenever he wants. Watching JR Giddens play just makes me mad because he's so terrible. Why would we draft that guy?

Rasheed looked old, slow, and lazy out there. If he spent half the energy going for rebounds as he did yelling at the refs the Celtics might be closing in on 60 wins instead of 50.  Nate played okay and hit a few big shots. Marquis didn't see any action once again even though Tony missed about 8 lay ups. For all the heart attacks Tony causes, at least the guy goes out there and gives effort and energy. That's all you can ask for.

A really bad loss for the Celtics. I understand the argument that they are looking forward to the playoffs but show some pride. There is no excuse for losing to the Knicks. Half the players on that team have or will play for the D-league at some point. You simply can't lose to a team like that if you have aspirations for a championship. Let's hope they bounce back tomorrow with a win.