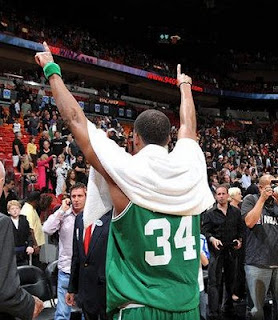 Paul Pierce led the Celtics with 32 points on 11 of 23 shooting, including a last second buzzer beater that gave Boston the win (see below). Ray Allen chipped in 25 points and Perkins was key under the basket again, grabbing 12 rebounds.

Dwyane Wade went down with 11.7 left in the game after missing a 3-pointer that would've given the Heat a tough lead. Wade was clutching his knee in agony after Ray Allen landed on his foot. Miami's best player needed to be lifted off the court and watched Pierce's game winning shot from the bench. After the game, it was reported that Wade was experiencing cramps and would return to face Boston on Sunday.

Before going down, Wade was expectedly the driving force behind Miami. He exerted the sense of urgency for his team, racking up 34 points. At the half, he led the Heat in points(15), assists(5) and tied for the lead in rebounds(4). He also had double the minutes of most of his teammates at halftime. His frustration was made evident by him grabbing teammates by the jerseys and barking orders. However, they did catch on in the fourth quarter; the bench ended up netting 39 points and Michael Beasley totaled 16. Ultimately, it wasn't enough to surpass the Celtics.

Boston took a 9 point lead with 9:57 left to go in the third on a 23-foot 3 pointer by Pierce. However, Wade and Beasley started to take the game back. This was helped largely by Pierce's two quick turnovers, one by stepping out of bounds and another a steal by Wade. This reignited the Miami crowd, and the Heat took the lead with 3:46 to go on two free throws by Dorrell Wright.

The game had gone back and forth all night and the Celtics were unphased by the Heat's late game surge. Boston kept toe to toe with Miami and put the game in Pierce's hands after he asked for the ball with the last seconds dwindling away. Pierce drained the dramatic game winning shot, giving the Celtics a commanding 3-0 lead in the series and surely deflating the Heat's confidence moving forward. Boston looks to sweep Sunday at Miami.