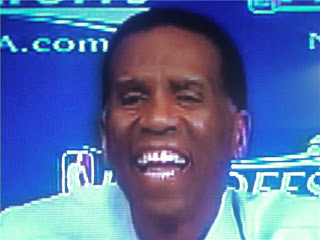 Adrian Dantley is awful as "acting head coach."  His nickname as a player was "the teacher" but he's certainly not teaching his players how to win.  Utah's without Okur and Kirilenko for the series and Denver's inexplicably overmatched.  He should not be a head coach in the league ever again, he just doesn't have what it takes.  For the record that's not AD laughing either; that was his expression when someone asked a question........If the Flakers beat the Thunder, you can book them in the conference finals.  Utah's far exceeding their capabilities thanks to the great coach Jerry Sloan is.  Too bad Sloan doesn't allow his players to wear headbands, maybe Utah could make a run at some top notch guys in the future.......In case you missed it, Roland Lazenby wrote a tremendous article on the slow death of Bean as a basketball player.  This will be some sight to behold over the next couple years, Celtics fans.  Get ready for a lot of fun at the expense of the Black Panda!.......Grant Hill won this year's NBA Sportsmanship Award, which is also known as the "Joe Dumars Award."  No word on whether this means Hill will become a GM in the league down the road, which will consist of several good years and then falling flat and sucking majorly.......
The magic number for the Magic this year is 10: they win 80% of their games where they hit 10 or more 3 pointers.  They're still a dark horse to win it all but have been playing the best of the contenders since the end of the regular season.......While Mike Woodson's looking to secure an extension as head coach, he should be looking to receive his walking papers after this pathetic first round playoff performance by Atlanta.  I could understand losing one game to the Bucks without Bogut but three?  Not acceptable whatsoever.  As a reminder the Bucks starting  frontline is Kurt Thomas (who makes Michael Finley look like the Roadrunner), Luc Richard Mbah A Moute, and Carlos Delfino.  Is that frontline even close to being better than David Lee, Gallinari, and Wilson Chandler?  I don't need to answer that one.