Keep up the good work Doc 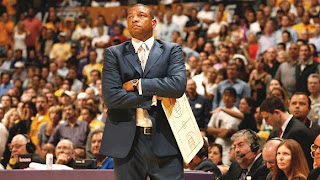 I've always loved Doc Rivers as a coach, but have had my share of issues with the way he allotted minutes in the past. Sometimes he is reluctant to shake things up when change is needed. During the last couple months there has been much debate about the Celtics rotation. Everyone knew Doc couldn't go 10-11 deep come playoff time, but it was just a matter of who was going to get minutes and how many. So far Doc has done a great job in my opinion.

First off, there is no reason, especially in this series, that Sheed should be getting more minutes than Glen Davis. When Davis gets minutes you see what he can do. Last year his scoring average jumped from 7.0 in the regular season to almost 16 in the playoffs, including that magical game winner in the Magic series (video after the jump). This year it is much of the same. Though it's only been two games, he is again averaging almost 16 points and 8 boards. He doesn't need to start, but should be playing starter minutes. Sure, 18% of his shots are blocked but I'd rather have that than Sheed's 28% three point average.

Another factor is free throw shooting. Everyone knows the refs hate Sheed so he gives up more free throws to the opponent. On the other hand Davis gets fouled virtually every time he gets the ball and is a good foul shooter. Free throws win games, right?


To his credit, Sheed has played pretty well during these playoffs. He will be needed if we are fortunate enough to advance against the Cavs or Magic, but in this series keep going with what is working. Maybe even sit KG for Davis if Glen is rolling again. It's not about playing the best players; it's about playing who is performing the best that game. Doc should keep giving Sheldon minutes because he's one of the best rebounders we have. When has that guy done anything negative for this team? Probably never.

Keep giving Finley minutes because, mark my words, he will win us a game during these playoffs (similar to PJ two years ago). Keep Nate on the bench and only throw him out there for a few minutes at a time to see if he's hot. The only thing he brings to the table is shooting. I can't believe I'm saying this but keep TA out there over Marquis. TA can flat out defend. While it's literally like watching a car wreck when he has the ball in his hands, he plays hard every possession.

Let's hope Doc continues to keep with the rotation he has now and adjusts as necessary. If we have everyone playing up to their potential why can't we win it all again? Stranger things have happened.