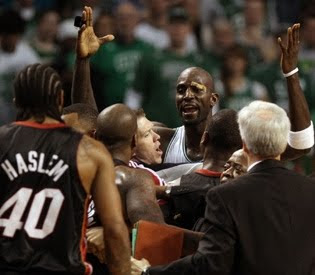 It shouldn't take much for a professional sports team to get motivated for a playoff game. However, if there was any team that might have needed extra motivation it is the Celtics. The apparent lack of interest by this year's team has been well documented. Claims that they are "bored" have been echoed by multiple players on the team and with the fan base. Maybe they needed something extra to get them going. Maybe the Quentin Richardson and Kevin Garnett squabble was exactly what they needed.

The truth is the only player the Celtics cannot win a game without is Rajon Rondo. They can't win a series without Garnett or Pierce, but they can last a game without KG. He is their heart and soul, but his absence should not affect the Game 2 result too dramatically. In fact, the long term affects of the incident could actually be beneficial to the team. The motivation and hunger wasn't going to come just by getting into the playoffs. Like anything else in life, there needed to be some event that triggered it.

As for the incident itself, it's ridiculous only Garnett was suspended. Quentin Richardson is an NBA nobody who should never be saying anything about players of Garnett and Pierce's caliber. Does Pierce whine a little bit? Sure, he does. Does Garnett talk trash? Of course he does. But all great players have and always will. Basketball is as much mental as it is physical and the way you last in the NBA is having both.

Though Garnett's presence will surely be missed Tuesday night, I think this is exactly what the Celtics needed to get them going again. This team has the talent to get to the Finals again. Sure, they are old and their core is not what they once were, but they are talented and experienced enough to make another run at the title. They were missing that chip on their shoulder they had in the 2008 season. They need to get that killer instinct back. Here's hoping the Garnett suspension awakens that fire.