The Easter Bunny hates Lebron...Celtics hold on to beat Cavs 117-113 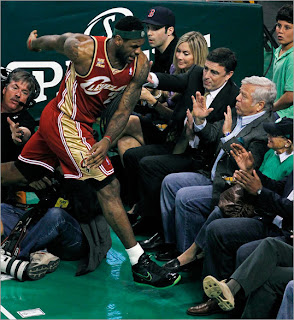 Happy Easter!  I truly thought the Celtics weren't going to give up the lead this game, but I shouldn't have been so foolish. The Celtics never play well for all four quarters and have a terrible habit of picking the 4th as the one to slack off in. They are lucky they built such a huge lead and were able to hang on. Lebron was in attack mode in the 4th which means he's scoring every possession. The Celtics can't get defensive rebounds which is the number one reason they won't win the title this year. It almost seemed like the Cavs weren't trying until the final period.

Ray Allen was the offensive star of the game with 33 points including a number of clutch threes. His three pointer with 46 seconds left to put the Celtics ahead by 4 was the shot of the game. No one except Ray Allen should be allowed to take clutch shots for the rest of the year. Rondo had a solid game with 16 points and 14 assists.  KG was only 5-14 from the field but went 9-10 from the free throw line including the game clinching free throws.

Pierce's defense against Lebron in the 1st half was huge and the reason we built such a huge lead. Unfortunately Lebron is superhuman and always finds a way to score.  Tony Allen continued his solid play and it looks like he has replaced Marquis in the rotation. Even though he had that goal tending call(questionable by the way) he was able to come back and score the following possesion  The bench as a whole barely played this game. Nate Robinson didn't play at all and Rasheed and Finley only played 10 and 8 minutes respectfully. I still think they should play Sheldon more as he has shown some good things in his limited court time.  Big Baby continues to impress me with his hustle and rebounding. So what if he plays below the rim? He maximizes his potential and that is all you can ask from someone.  If everyone on the Celtics played at his energy level every game we would be much better off right now.

Lebron scored 20 points in the 4th and 42 for the game. However, he missed a couple big free throws down the stretch and missed the potential game winning three.  I thought for sure that shot was going in by the way. Mo Williams had a big first half with 5 three pointers but was silent in the second.  I hope they play Shaq  a lot in the playoffs because they are a better team without him on the court. Hickson continues to impress me with his rebounding and ability to finish around the basket. The Celtics could really use someone like him on their team.  I thought Mike Brown was going to tackle the ref in the 3rd quarter. It turns out that sparked the Cavs come back.

We shouldn't be too happy about this win. They blew a 22 point lead and were frankly lucky Lebron didn't go into assassin mode earlier on.  Still, anytime you can beat Lebron you have to at least be a little happy.  Let's hope the Celtics can play the way they did the first 3 quarters for the rest of the season and into the playoffs.