Celtics vs Heat: Heaven or Hell 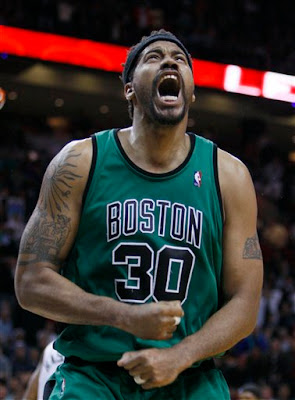 A new beginning, a new road, the moment of truth has arrived: welcome to the NBA playoffs. Our Boston Celtics start their season facing the Miami Heat. Here are some clues for the Celts in these series:

It seems that the regular season has been a longer than hell training camp for the Old Guard. In secret, far from the spotlight the 3 stars have been healing from their wounds. Although hurt and wounded they have managed to play through the whole season, learning from the effect of age on their bodies, watching and studying younger heroes willing and ready to steal their glory...and they are still alive and standing, ready to play one more time together for the glory

That's the number of playoff games in Rasheed Wallace's CV. His judgment day has arrived, the moment when he is expected to deliver his true basketball skills and thirst for a new ring. Sheed needs to rebound, play tougher D and play in the post. If he plays like he was expected to play when Danny signed him, then we could advance far in the playoffs

Rondo has been the MVP of the regular season and he will mark the rhythm and quality of our game throughout the series.  A focused Rondo is unstoppable for any team, and the Heat have no weapons against him

Perk will face an old time enemy: Jermaine O'Neal. Nothing better to motivate our starting center, whose production and low post play will be essential to beat the Heat in the paint

Tony will have to try and slow Dwayne Wade down when he gets on fire. It seems he has matured a little and that he has learnt his role to perfection this year. We need his D.

Baby had his best career games last year in the playoffs. He will be asked to score and hustle when coming from the bench and providing that inside spark that will be needed when the older guys get tired.

The team needs to isolate Wade, force him to try difficult shots..deny his way to the basket. No single player can stop him on a regular basis, so all the players will have to keep an eye on him and help in D to minimize the effects of one of the best players in the league

This was the word chosen by Doc Rivers to give an identity of our team in 2007. We need team effort, to die on D in every possession and to give it all for the sake of the team. Doc may leave in summer, and so may Ray Allen. Let's try once again, Celtics. Together.

It will be heaven or hell for the Green squad in Florida. Let the games begin!