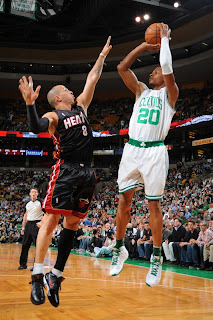 Paul Pierce got his wish. He won't be going back to Miami, except on vacation.
Ray Allen scored 24 points on 5/6 shooting behind the 3 point line as the Celtics eliminated Dwyane Wade and the Heat in the first round of the NBA playoffs.
Dwyane Wade was 10 of 24 from the field and racked up 31 points. Ultimately, it wasn't enough as the Celtics ended the Heat's championship hopes.
Rondo had a double double with 16 points, 12 rebounds and Pierce racked up 21 points. The Celtics totaled 38 rebounds and Perkins had 3 highlight worthy blocks.


Led by Ray Allen, the Celtics kept their energy going coming out of the first half and extended their 10 point half-time lead to 21. However; the Heat, led by Dwyane Wade, cut Boston's lead down to 6 on a 19-2 run to end the third. The Heat seemed to be surging at the right time and were able to pull within three in the fourth. Yet, Basketball is a game of runs and the Celtics went on one of their own. A late game Boston run brought the Celtics up by as much as 12 and closed the game with a 96-86 victory.

Boston began the game with an impressive 67% shooting from the field. For the the first time this series, the Celtics outscored the Heat in the first quarter, 29-21. The refs were easy on the Heat for much of the first half as the Celtics did not attempt a free throw until almost 4 minutes were left in the second quarter.
Miami was 47-35 in the regular season and 5th in the Eastern Conference. The Heat entered the playoffs strong, winning 9 of 10 games, and were expected to give the ailing Celtics more trouble than delivered. Dwyane Wade is a free-agent and tonight may have very well been his last in a Heat uniform.
The Celtics will advance to play the winner of the Cleveland-Bulls series in the second round.