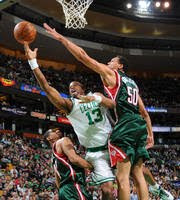 The term "meaningless game" is thrown around loosely in sports. But if there was ever one that fit the bill it was this one. Tonight's game didn't mean anything to the Celtics. Scalabrine played 30 minutes which should tell you something. By the way, Scal tries hard and is unselfish. He's just not athletic enough to be in the NBA.

The fact is, it behooved them to lose this one so they'd have a chance to play the Bucks instead of the Heat. Everyone knows the Bucks would be a 100 times easier matchup than the Heat especially without Bogut. Unfortunately Yakhouba Diawara, who has not hit a three all season, hit a bank three to put the game away. Yup, a bank 3 from one of the most random players in the NBA changes the course of the playoffs.

As for the game itself, Rondo put in effort with 21 points and 15 assists.  Sheldon played well in limited time as he usually does. I hope he gets some minutes in the playoffs. Marquis did a decent job but it just makes me sad watching him.  Rasheed didn't score on his own basket and managed to grab 6 boards.  He will be the reason we win or lose in the first round.

The Bucks  have some decent shooters. It's a shame Bogut isn't around because they could give teams some trouble.  I'm shocked Jerry Stackhouse is still in the league. That guy has been around since I was like 6 years old.  The two best open jump shot shooters in league history were on display tonight in Kurt Thomas and Michael Finley. Unfortunately both stunk up the place. Finley's second straight bad performance is not a good sign heading into the playoffs.

There is a bright spot to all of this. Chicago won and will be playing the Cavs in the first round. Expect that series to go at least 6 games and for David Stern to be on heart attack watch if it goes to 7.  It's been an up and down regular season but the real season starts this weekend. Let's go in with confidence and cheer on our team. Go Celtics!