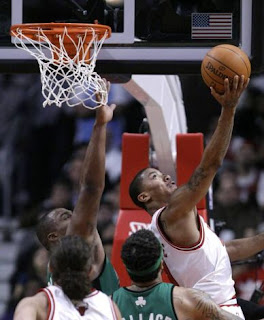 Before we go into specifics from tonight's game let's look at the bright side.  The Bulls now have a better chance of getting into the playoffs which means the Cavs will have a tougher test in the first round. Also, Pierce looked great and no one was injured.  Now to the bad news.  Derrick Rose absolutely manhandled Rondo tonight with 39 points on 15-22 shooting. Rondo mustered only 4 points and was a non-factor all game long. Even worse was Kirk Hinrich dropping 30.  Think we could've used Tony Allen tonight? I can't believe I just said that.

As mentioned, Pierce had a solid game with 28 points.This included an eruption at the end of the 2nd and into the 3rd quarters where he took the ball to the hole at will like the old days.   Don't you wish he could do that every game? I guess he was serious when he said these last two games mean a lot to him.  Ray played pretty well offensively as well with 25 points including four from behind the arc.  Other than that no one really showed up.

Everyone talks about how much of a dissapointment Rasheed has been this year but Marquis has been almost equally disappointing. He has been a non-factor really all year and at times looks like he's not even trying out there. Also, as much as I love Big Baby the guy looks for contact maybe a little too much and needs to stop forcing it. He needs to realize he's undersized and can't overpower people all the time like he did in college.

Perk picked up his 16th technical which, barring a reversal, means he's sitting next game. Hopefully everyone sits next game as we have nothing to play for. However, it's still funny to think our two centers have a combined 30 technical fouls between them. Most TEAMS don't have that many.  Michael Finley had a rare off night and missed his first ever open jump shot in his 14 year career.  Just when you thought you'd seen it all from Sheed, he tips the ball into his own basket.  He never ceases to amaze me.

The Bulls could give the Cavs some trouble, which is good news for the Celtics, though the first round looks questionable at this point for Boston.  I probably wasn't the only one thinking how good Hienrich would have been in Celtics green. It's very unfortunate we didn't do more at the trade deadline seeing as how this year is probably our last shot at a title.

Overall a pretty meaningless loss for the Celtics and a extremely meaningful win for the Bulls. If they can win their final game they are in the playoffs so obviously they had a lot more to play for. Even though we've seen it all year it's truly amazing how inconsistent this Celtics team is.  Maybe I'm a hopeless dreamer, but I still hold out hope they can turn it on for the playoffs and at least get past the first round. Let's start Scal tomorrow night and end the season on a winning note!