Bring on the King! 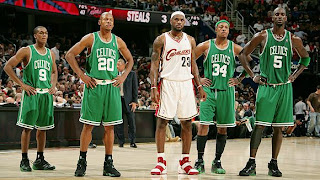 All season we've been hearing it's Lebron's year. That Lebron is on a mission to win a title for the city of Cleveland. We know the networks want Cavs-Lakers, and that the Celtics have been all but counted out since mid-season. We've heard the Celtics are too old, that they don't have the hunger they used to. No one has picked us to win and many don't even think it will be competitive. You know what I say to that? Bring on the King!

Two years ago before the Lakers series no one outside of Boston thought the Celtics could beat the "amazing" Kobe Bryant. All we did was go out and beat them by 40 in the deciding game. It's a similar situation here. Lebron is thought by many (me included), as the best player in the game, and that he can't be stopped. Has anyone ever stopped to think that maybe we are giving too much credit to a person that has never won a title? Let's please stop with the Lebron is invincible crap until he actually wins something.

The Celtics are going to need to play much better than they did last series to win. They played well last series, but not great. The Heat are nowhere near as good as Cleveland and the Cavs have home court. We need to win this series in 6 or less because a deciding game 7 at Cleveland is going to be nearly impossible to win. Lebron is going to get his points. That is a given. It's shutting down everyone else that needs to be a priority.

Jamison is a good player but does not have any deep playoff experience. Mo Williams is good when his three point shot is on but ineffective otherwise. We need to hope they play Shaq a lot because he's a giant corpse that might act as the Jermaine O'Neal of this series. Whoever wins the Glen Davis/Rasheed and Varejao/Hickson match up will probably win this series. The stars are going to come up big; it's the bit players that will determine the winner.

At the end of the day, it really all comes down to making shots. If the Cavs make open 3's they will probably win. If Ray and Pierce are hitting 3's the Celtics have a chance to win. Also, we need to decisively win the point guard and center matchups. Rondo and Perk need to dominate Williams and Shaq. Pierce and Ray can equal out Lebron's production and the bench players for both teams are fairly equal. Look for Michael Finley to pull a PJ Brown sometime in this series as well.

The best thing about this series is the Celtics really have nothing to lose. They are not expected to win, so they can go out there and play free and easy. This team has been there before and beaten Lebron in the process. Is this Cavs team really that much better than that team from two years ago? Is the Celtics team that much worse? Probably not, and I'd argue that at its best this Celtics team might be better (assuming TLC comes to play.) Let's not fear the King. Go out there and show them that Celtic pride!