Avoid Dwayne Wade at all costs 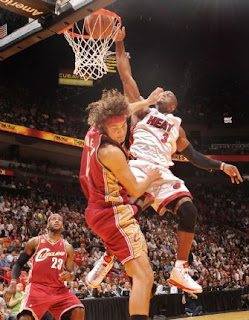 The Celtics loss to the Wizards last night was inexusable and downright pathetic. However, there could be a silver lining in all of this. If the playoffs started today the Celtics would be the #4 seed which would put them in a match up against the Bucks who are without Celtics killer Andrew Bogut.  This would mean the Hawks would play Dwayne Wade and the Heat in Round 1. I think it's pretty obvious which team the Celtics would rather play.

People keep talking about potential second round matchups for the Celtics, but they are going to struggle to get out of the first round if they continue to play like they have been.  Last year they barely won as a 2 seed. Granted they didn't have Garnett, but that team was playing at a higher level than this team is right now.

The fact is the playoffs are all about star power. One player can win a series and Wade has the pedigree to do so. Plus, can you imagine having to face Dwayne Wade then Lebron in back to back series?  That would make it nearly impossible for the Celtics to move on.

I am by no means saying or implying that the Celtics are tanking the end of this season. They've not played up to their potential for a long time.  However, if you want to look at the bright side, playing themselves into the 4th seed might not be the worst thing. Sure, Lebron would await in the 2nd round but if the ultimate goal is to win a title we are probably going to have to play him anyway. Plus, the Magic are playing at a very high level right now, so I'm not sure which team would be an easier match up.

I always say expect the worst hope for the best when it comes to my sports teams. Go in with a carefree attitude and enjoy watching your team play.  Only good things can happen.  Let's hope the Celtics stop being "bored" and bring back that Celtics pride for the playoffs.