Why we love the Underdog 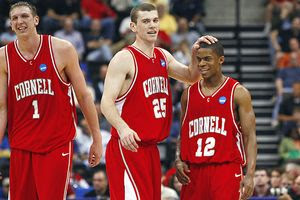 March Madness means the underdog takes front stage once again. In no other sporting event in the world do we see more upsets than during these 3 weeks. Nobody becomes somebody. Heroes are born. Goliaths fall. We embrace the underdog because in a way most of us are all underdogs in some sense. We want to see the little guy win because we have all been in that position before. Sure, when Northern Iowa toppled #1 seed Kansas most of us tore up our brackets. But then we cheered for these unknowns who were suddenly on center stage. Why? Because we've all dreamed of feeling that excitement for ourselves.

It's interesting that Americans get so behind underdogs because America is the anti-underdog. We are the most powerful nation in the world and besides soccer, expected to win pretty much everything. But while America itself is like that, the citizens themselves come from all walks of life. 99% of us will never set foot on the world stage. We go about our regular days fighting against the odds to succeed. The world is a cruel place sometimes and we are all battling to make it through. For us, we are the underdogs in this game of life (sappy but true!)

I realized when the Colts lost to the Saints in the Super Bowl that it is almost as fun to root against a team as it is for a team. That is another reason we love the underdog. We love to root against the favorite. For the casual fan who doesn't have money on their bracket, you are probably pulling for Cornell tomorrow night. Chances are you won't be rooting for Duke to win it all. I'd love to see an all mid major final someday. I can see Duke and Kentucky play anytime I want.

Nobody remembers the favorites who won. We all remember when George Mason made their magical run back in 2006, but some might take a few moments to remember who actually won that tournament. " Who is this year's George Mason" replaced "Who is this year’s Gonzaga". You never hear who is this year's Kansas or UNC or Duke. Every year there is a champion but usually it's the underdogs who stay in our memories forever.

My bracket is done and has been since Villanova lost last Saturday, but truthfully I don't care. I'm going to enjoy rooting for the Cornell's and Saint Mary's of the world. I'm going to hope Northern Iowa can continue their magical run. I'm going to root with everything I have against Duke. I will always cheer for the underdog unless of course it is against any of my teams. It's human instinct to root for them. Plus, it's just a lot more fun if the little guy wins than the favorite, don't you agree?