What the Hell Happened to...Frank Brickowski? 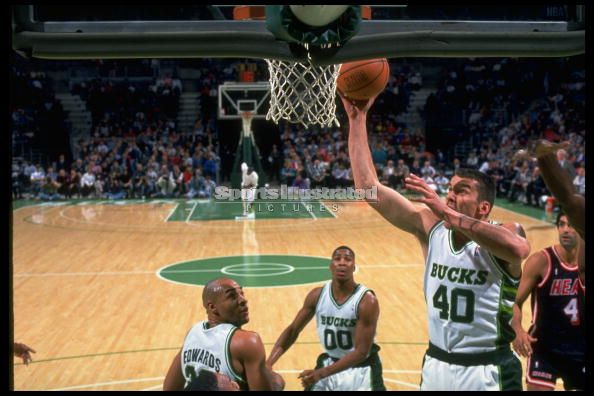 "If you ever die and go to heaven, you want heaven to be Magic Johnson's house parties," - Frank Brickowksi

He was a 6'9 bruiser who had a surprisingly soft touch from the three point line.   If you're looking for information about him online, it's pretty likely that his name comes up most frequently alongside Dennis Rodman, for their antics in the 1996 NBA Finals.  If you'd never seen him play, a decent comparison to him would be Brad Miller today (not Brad Miller the All Star).  You may remember Frank Brickowski.

Brickowski was drafted in the 3rd round by the Knicks in 1981 after playing 4 years of college at Penn State.  However the Knicks felt he wasn't ready to contribute to the team, so he went overseas to play for 3 seasons, in Italy, France and in Israel for Maccabi Tel Aviv. 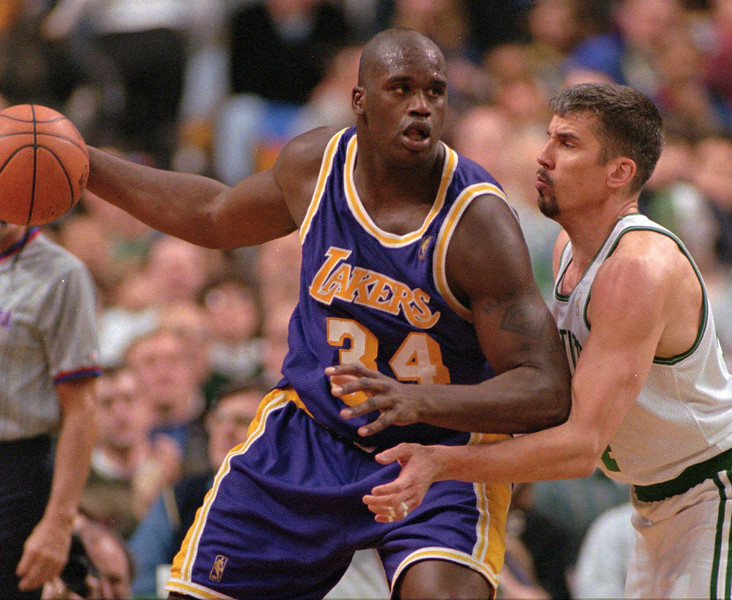 After returning to the NBA for the 1984-85 season, the Knicks had relinquished their rights to Brickowski, and Frank signed on with the Sonics whom he played with for the next 2 seasons.  After 2 rather irrelevant years, he signed with the Lakers to start the 1986-87 season, but only played in 37 games before being traded for Mychal Thompson, who would prove to be a thorn in the Celtics' side in the Finals later that season.  [Tangent Time: Brickowski was very much like the Kwame Brown that year that fetched Pau Gasol (not quite as ridiculous a trade since Thompson wasn't quite as good as Gasol).  When the Lakers acquired Thompson he was a big guy that defended McHale better than most other players in the NBA.  Thompson had attended the University of Minnesota with McHale and was the number one pick overall in the 1978 Draft, the same draft where the Celts picked Larry Bird at six.  I always hated Thompson, and as a result despised those Thompson Water Seal commercials they always used to play back when the Finals aired on CBS.  Even back then at the tender age of 9 I remember thinking those commercials were somehow promoting the Flakers lol.  For the record I'll NEVER purchase a product from Thompson Water Seal, even if I need to put it on my deck.]

In San Antonio, Brickowski made his NBA breakout statistically.  For his first 2 seasons he averaged almost 15 ppg and 6.6 rebounds in 30 minutes per night, all while starting 128 out of a possible 134 games.  This was the case of good numbers on a bad team though.  The Spurs were horrendous those 2 years.  When 1990 rolled around and David Robinson came on board, the Spurs had at the time, the biggest improvement win-wise in NBA history, improving by 35 games that year.  In 1990, Brickowski would come off the bench.

That summer he was dealt to Milwaukee for Paul Pressey.  He'd play with the Bucks for 3 seasons while putting up solid numbers again.  He was then dealt to Charlotte, waived by the Hornets after only playing in 28 games and then signed by Sacramento.  A shoulder injury forced him to miss the entire next season and Brickowski was then traded from to the Sonics.


It was in Seattle that many people got to know him because of his prime-time performance in the Finals vs Dennis Rodman and the Bulls.  For those who don't recall, enjoy:

[Tangent Time 2: It's amazing how my perception of those Bulls teams has changed over time because of how much I loathe Whistlin Phil.  I respected him in Chicago, thought he was dealt a good hand and was able to knock off the Knicks year after year, which I loved.  But as soon as he picked his spot with the Flakers and got on that high chair of his on the sideline, well, you know the rest.]

Following the ostentatious showing in the Finals, Frank decided to play one more year, but went to Boston and joined our beloved Celtics for the 1996-97 campaign.  As ML Carr tried to sign inferior players that would help the Celtics win the draft lottery, he gave Brickowski a 1 year, $1.5 million deal.  Brickowski only played in 17 games that year, but 1 of those 17 I was able to attend!  It was Friday November 22 from the Fleet Center.  For the first half of the game I sat about 2 rows behind the Celtics bench, as the people came to claim their seats only for the second half.  Frank got the start that night, and actually had 11 points and 5 rebounds in 23 minutes, including a blistering 2-4 from 3 point range.  The Celts got hammered, but that was the point right?

Frank's ex-wife, Tina Kraft Brickowski (pictured to the left), is actually somewhat famous herself.  She won first prize for a modeling agency for women over 40 back in 2003.  This article talks about her relationship with Frank and their troubles conceiving a child, which she said took 10 years or so to accomplish.

I must admit it was difficult finding out what happened to Frank Brickowski; he seems to live a low-profile life.  After a lot of research, it turns out that today he makes appearances on a show called Talkin Ball, which is based on Comcast Sports in Oregon and predominantly talks about the Blazers.  In December of 2009, Brickowski was scheduled to talk on this show when Portland was about to play the Cavs.  How great would it have been for Frank to lay LeBron or Mo Williams out for their dancing routine?