Celtics DON'T blow Second Half Lead in win over Bobcats 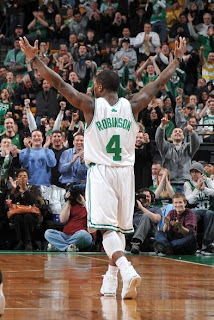 The Celtics needed a win like this badly.  When was the last time you felt comfortable going into the last few minutes of a game? It's been a long time that is for sure. Pierce looked the best I've seen him in months, scoring 27 points on a efficient 9-13 from the field. He was able to drive to the basket at will, and looked like the Pierce of old. Nate Robinson is really starting to grow on me. His 16 points off the bench, including two huge 3's in the first half that gave the Celtics momentum, is why we brought him here.  I still wish we had Eddie, but Nate can give us a scoring presence that House was not capable of.  He also is a solid ball handler that can step in for Rondo which we sorely needed.

In the middle of the 1st half when the Bobcats got within 3 it looked like a classic Celtics collapse. It was great to see the Celtics turn it on at the end of the half and carry that momentum into the 3rd quarter.  That was the most important thing to take out of tonight's game. The Celtics shut the door on a team, a solid team at that, and did not let up until the buzzer sounded.

The bench played well, though Rasheed as usual was lazy on defense at times.   I really do think he and Randy Moss must be best friends.  I've never seen two players take so many plays off, then make spectacular plays in the same game. I was glad to see Ray only get 18 minutes and Marquis get 30.  There really isn't a huge drop off when Marquis goes in the game and it is important to rest Ray and Pierce as much as possible going into the playoffs.

This was the first game the Celtics had their full roster all season.  I'm not ready to say they are back, because like I've said all year a random Wednesday night game in early March does not make a season. At the same time, crushing a decent Bobcats team at home where they have struggled as of late is a good sign.

It's also a good sign that the Captain looked so good.  We tend to overlook him sometimes, but he is still the closest thing we have to a Kobe or Lebron on this team. Let's all take this win with a grain of salt, but be excited about what is to come.  I don't think any team is unbeatable this year and when healthy this Celtics team can match up with anyone.