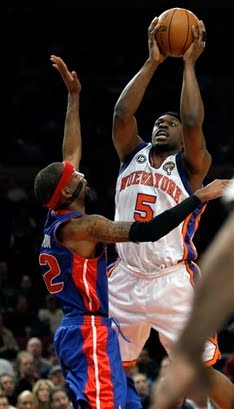 Lost in all the hoopla surrounding Nate Robinson's solid play of late has been the emergence of Bill Walker for the Knicks. After putting in 21 points on Monday versus the Cavs, his performance was dismissed by many because it came in a loss, a good old fashioned extended garbage time loss. Well, in last night's victory over the Pistons, Walker contributed another 22. It would be much more timely to wait until after a Celtics loss to write an article like this, but that would be lame in my opinion. One can be happy with the addition of Nate, but still lament that Danny overpaid once again. The 22 year old Walker was considered a lottery talent coming out of college yet never received the tiniest chance on the Celtics, a team starving for youth, athleticism and a back up 3. Now that's also on Doc no doubt. It wouldn't have killed the Celtics to give Walker a shot these past two years. If anything it would have kept Pierce fresher. And we all saw last night what a rested Pierce can do.

My issue is that the Nate for House trade did not need to include Walker. Danny wanted Robinson. D'Antoni wanted Eddie. The original deal which included Eddie, Giddens and a 2nd rounder was more than fair. Somehow the Knicks also got Walker. We still had options on him and he would have been a cheap player to keep around. For any talk that he might return to the Celtics, there's no way that happens. Boston will be the last place Walker wants to sign. After seeing the court he will not want to return to the scene of the crime, aka repeated DNP CD's. Now I'm not going to compare this to the Suns getting Joe Johnson from us. Obviously that was a bigger deal with more coming to Boston, JJ being a better player, etc. It's only been 2 starts for Walker, so we shall see. But speaking of seeing, it simply would have been nice to see what Walker could have done in Boston both in the past (Doc's fault) and in the future (Danny's fault).