The thin line between winning and losing 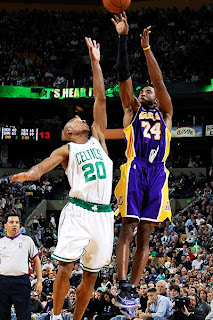 What if he had missed?
I've always had a bad habit of playing the "What if" game in all aspects of my life. This game is especially tempting to play in regards to sports.  What if they had made that shot or that foul wasn't committed? What if we had that guy in the prime of his career instead of now? It's a game that can't be won because there is no going back in time and changing the past.  You have to just accept what's done is done and move on.

I was prompted to write about this after yesterday's crushing loss to the Lakers.  My first question to all of you is, would you think differently about this Celtics team if Kobe had missed that shot and we won the game? I think a lot of you would, but you shouldn't. Whether or nor they had won yesterday's game they are still the same team with the same issues.

That is my biggest pet peeve with sports media and fans. Teams are judged solely on wins and losses which are often determined by one play or one call.  An entire article can be written differently because a free throw is missed. It's absolutely ludicrous.  Sure, at the end of the day it is all about the W. However, there is such a thin line between a win and a loss in sports.  You need to look at the bigger picture and not slant a story just because the team happened to pull out a win.

The truth is, in the regular season there is a huge difference between a blowout and a 1 point loss.  I've said it all year. I'd rather have the Celtics keep improving and get healthy then throw everything they have at a game or two in January.  The fact is the Celtics played as well yesterday, for most of the game anyway, as they have in months. If they played that way against the Clippers last Monday they would've won by 35. But, in a lot of people's minds since we beat them then we must have played better against the Clippers than the Lakers. It's just dumb when you think about it.

Now, a second argument could be that the Celtics have had trouble closing teams out, and that is definitely an issue.  They seem to play not to lose rather than play to win.  But please spare me the whole, the Celtics are done, they lost to the Lakers. Read that again. They lost to the Lakers who last time I checked were tied for the best record in the league. They lost to the Lakers with KG still ailing, Ray Allen not making a shot, and without their best back up guard.  They also lost to Magic team that is 18-4 at home at the buzzer. If anything we should be hopeful right now.

Let's all calm down and look at the big picture here. The Celtics are for the most part playing better and getting healthier. Rajon Rondo is the best player at the most important position in the league right now. Garnett is showing some signs of getting back to at least where he was before the injury. Pierce is having his most efficient season ever, and the team as a whole seems to genuinely like playing together. Don't let the win/loss record blind you from what this team is capable of. Keep the faith Celtics fans!