A steal of a deal 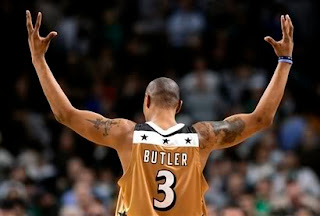 mavs also getting cash from wiz in trades

What a dumb move by the Wizards and what a coup for the Mavs. Caron Butler for expiring contracts? AND the Wiz throw in a starting center. And then just for kicks the Wizards send some cash. Worse decision: Bringing guns into the locker room or this trade?

At least the Grizzlies got a couple first rounders and Marc Gasol for Pau in that well known Lakers heist. And Danny Ainge denied talking with the Wizards. If true, that's pathetic. Butler is 5 years younger than Ray and would have been a huge acquisition. And Haywood as a sweetener is nothing to dismiss. Awesome trade for the Mavs. Unless Danny somehow turns his expiring contracts into Deng, Hinrich and Thomas then he really missed out here.