Did the Celtics just lose to the Nets? 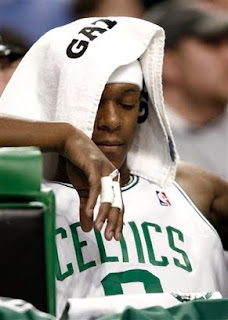 At home no less. KG had 26 and 9 and Rondo had 13 and 17. Marquis continues to be one of our most solid contributors shooting 8 for 9 today. That's the end of the good news. Ray came back down to earth today, as streaky players do. Perk has disappeared, while 'Sheed continues to be allowed to do whatever harm he wants. Today that was shooting 4-13, which of course included 1-5 from the 3-point line. I blame most of this mess on Danny and the players, but Doc gets the blame for not benching 'Sheed after the first 3-point attempt each game. He'd bench Perk if he attempted a 3 right? Yeah, but Perk can't shoot 3's. News Flash: Our 7 foot back-up can't either.

I'm also amazed that Danny was so naive to think this team didn't need a major move. Caron Butler, Spencer Haywood, Tyrus Thomas, Kevin Martin, Antawn Jamison, Amar'e Stoudemire... the list goes on of players who were available for expiring contracts and picks, but Danny struck out. We needed to add youth and athleticism and the best Ainge could come up with was trading House and Walker (and his blown first rounder Giddens) for Nate Robinson. And that trade took Ainge like 3 days to complete.

To quote Michael Ray Richardson, "This ship be sinking." It's up to the 12 players in the locker room to somehow man-up between now and the beginning of the payoffs. After watching the Sox come back from a 3-0 hole to the Yankees in 2004, I never count out a team, but we're at that point right now. Maybe its time for some Jack Daniels. I guess Danny could sign Kevin Millar with one of the open roster spots he refused to use on Leon Powe. The trade deadline has passed. What other options are there? Time for the players to "Cowboy Up" like the Red Sox did. Sounds pathetic, but that's the only hope we have.