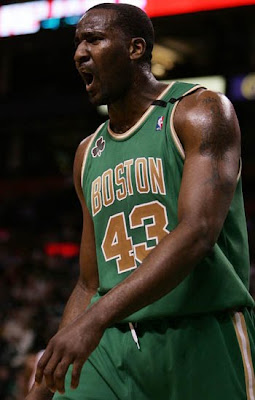 I refuse to believe that this is how the New Big Three era will end. The way this team is playing at the moment is not a true measure of what it can do. I think most of us feel that way. Again, that just makes it even more frustrating to see them perform the way they do at this point in time.

But let me take you back, if you'd like: I remember a point in the season when the Celtics were not even playing good basketball and were still winning games. They were not playing pretty ball but the fire raged in them and coupled with a huge amount of talent distributed between them, that was enough to finish off teams. Now, we still have the talent but that fire is nowhere to be found. My level of expectation for this group of players is at a low point right now, I'll admit that. Right now, I'd be happy to make it out of the second round. Right now.

It's still only February and a lot of stuff can happen between now and the playoffs. I think that what all of us hope, no, scratch that... What all of us demand, is that this group of players go out there and bust their butts. We need that fire back. We need hustle plays, we need help defense, we need hardnosed screens and we need to just flat out step up. All the little things that make a contender.

This team has shown that it can compete with the best NBA teams out there. In fact, if we play at the highest level than we can play at, there is only one team that can beat us: Ourselves. If we can stay healthy, we will be a dangerous team come playoff time. And why? Because a group of players with so much talent simply can not keep playing this badly. I truly believe that.

This may be the final year of the famed "window". I hope the players acknowledge that and step up to the challenge. This is not some mediocre NBA team. This is Boston, sports capital of America. We may lose but we have to give it our all out on the court. At least we'll be able to take pride in our effort, even in defeat. If the players remember that, we may still have a shot. We just have to act like a hurt animal cowering in the corner, ready to lunge at anyone that shows a sign of weakness. When they say we are down and out, let's move in for the kill. Let us be that hurt animal.