What the Hell Happened to...Ronnie Grandison? 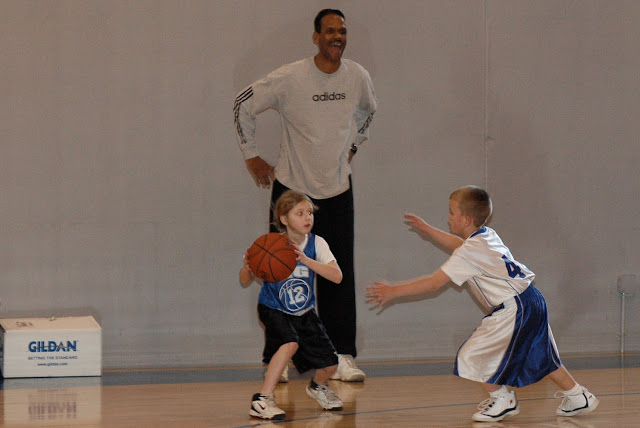 Only extreme diehard Celtics fans remember Ronnie Grandison, but that was typical.  It was never easy for Ronnie Grandison.  Never.  He started his college career at Cal-Irvine but after two lackluster seasons, he decided to transfer to Tulane.  Then once he got to Tulane, a point-shaving scandal took place and Grandison was looking for yet a new college.  This time he went to the University of New Orleans.

After graduating Grandison was a 5th round pick by the Nuggets in the 1987 draft (why did they used to have so many rounds is beyond comprehension for me).  He didn't make the Nuggets and was the final cut.


"I can still see Doug Moe coming in every day wearing his blue jeans and running shoes with no socks," said Grandison. "He was a funny guy, but make one mistake and he was all on top of you no matter who you were.  I was on my own there. They didn't tell you much in Denver. "

After playing for Rochester in the CBA, Ronnie eventually got his call from the Celtics.  Jimmy Rodgers brought up his name and scout Rick Weitzman followed through with some research.


"I saw him play about two years ago and I liked his work on the boards and in the post," said Weitzman. "Back then, there was some question about his shooting ability and his defense, but from what I've seen in camp, he's improved tremendously in both areas.

What Ronnie did was bust his ass.  He  could never get by solely on physical gifts, so he hustled a lot, hit the floor for loose balls and really tried to rebound the ball.  He appeared in 72 games during the 88-89 season with the Celtics, his only one.

After the 1989 season with Boston, Grandison took a most unusual NBA circuit.  He next appeared in the league 3 years later with the Hornets where he only played 3 games.  Then he was out of the league 3 more years until the 1995 season where he played 2 games for the Knicks.  The next season he was back for 18 games with Miami, 4 for the Hawks, and 6 more with NY.  So his total number of NBA games played was 105 and 72 of them came for the Celtics.


He was far from dazzling in his time with Boston.  He averaged about 7 mpg and 2.5 ppg (in other words he was a lot more efficient than Jarred Jeffries).

I don't remember too much about him from his time on the Celtics other than I had this basketball card to the left and also had a Celtics calendar that year.  The calendar was funny because every month had a different player.  However back then the coach (Jimmy Rodgers) was given a month and add to that 12 players, and well, there were 2 more players than months in the year!  In order to allow all the players to appear, they stuffed Grandison and Ramon Rivas onto a last page, after December.  In fact I was able to dig this up and am posting the picture of this amazing occurrence!  It's not too surprising that Bird and McHale had their own months while Grandison and Rivas shared.  Without further ado, here it is! 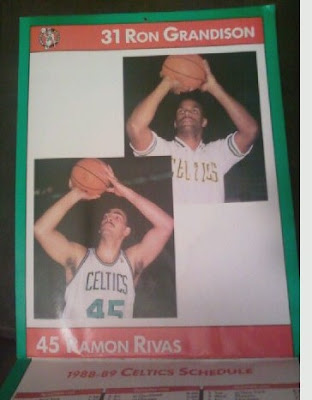 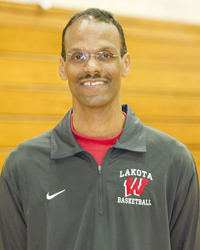 So what the hell happened to Ronnie Grandison?  Back in 2000 he was part of the Living Food Films, a non-profit organization geared towards "creating professional, educational, documentary-style videos regarding the superior health benefits derived from Vegetarian and Raw, Living Food consumption."  I'm not sure if there's actual video footage of Ronnie Grandison participating in this, but there's a fantastic still photo I start off the article with.

Interestingly enough as of 2002 he was actually the head coach for the Courts of Praise Christian Center in Cincinnati.  The part that was interesting was it was a team made up of high school kids who were home-schooled.  Check out this article on it if you can.  The entire concept of kids being home-schooled really is puzzling to me.  I guess Ronnie had no problem with it.

Grandison has been involved with numerous activities including coaching The West Firebirds girl's Freshman team as well as recently coaching at Cincinnati Hills Christian Academy.  He also heads up the Ronnie Grandison Basketball Academy, not to be confused with the Zan Tabak Skills Camp. Ronnie seems to literally do it all, and based on the comments left on this article, is an absolutely wonderful human being who seems to take more joy in seeing others prosper and succeed as a result of his teaching.  Way to go Ronnie!!


For a complete roster of this feature: What the Hell Happened to? Index