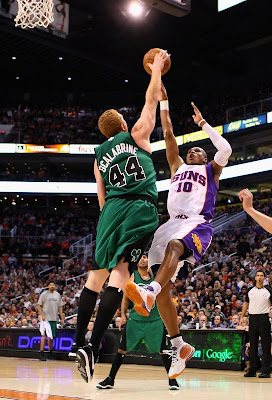 He has been there for the most part of these last five years: sitting at the center of the bench, cheering up the team, talking to the coaches and being a presence in the locker room. His contract made him a lock in trade ideas around the world, he's been shipped to Sacramento, Washington and New Orleans, but the fact is that you always end up finding him sitting at the same spot on the Celtics bench.

Get ready for it: it might be time for you to realise that the moment some wished for so long time is about to arrive. One day, our red haired forward will not suit up in green and that day could come as soon as next week, next month or the summer. Most likely he will be included in a trade in the next few weeks, as his most hated feature (his hefty contract) is the most attractive trade chip for the team to get some help for the championship run. If somehow he manages to continue here after February, I believe he will be playing his last career minutes in June. Hopefully, he will retire with a ring this summer and will start working for this organisation in another level.

Brian Scalabrine will be known for his team oriented play, the brain doctor examinations, his three pointers from the corner and his tough defense. Some will also keep in mind his reluctance to shoot that three when left wide open at home games, his lack of rebounds or his inability to find his own shot. But all of us will remember that we once had a player that could hustle and play under any circumstance, risking his own health and life after several hits on the head.

As for me, I will remember Mr Brian Scalabrine as the perfect teammate, the ultimate team player that could sometimes put a smile on your face when he hit consecutive three pointers and make our team reach double digit leads in games.

Soon, I believe, he will be sit some inches further from his usual spot on the bench, close to Ty Lue and the rest of the coaches and assistants. Until then, enjoy the last playing days of the unique Celtic, Brian Scalabrine.