A Golden Opportunity for Sheed 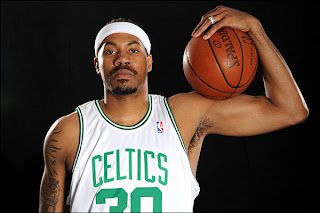 The key to life is trying to make the best of bad situations. Stuff happens and you can either get depressed about it, or make the most of it. KG's injury is a perfect example of this. While his injury is certainly a concern for the Celtics, it could turn out to actually be for the best.


In a perfect world KG would be 100% healthy with the lift he had 10 years ago, but that just isn't the case anymore. He's got too many miles and has developed into more of a role player, albeit vital role player for the Celtics. We won’t win a title without him, but we can win home court if a certain someone steps up and plays to his potential.

This person of course, is the often scrutinized Rasheed Wallace. Since Day 1 I've been one of his harshest critics, but I do it because I want him to succeed. It's like a parent treating their most gifted kid more strictly than their other kids, not because they are trying to be mean, but because they know they can be better. No one is denying Rasheed's talent, just his effort and decision making. People love how he stretches defenses, but when you're shooting less than 30% from the arc is that really a good thing?
The good news is this can change, and it shouldn't be that hard. I'm not expecting Sheed to stop shooting threes, in fact I want him to keep shooting them because it is good to have that threat. However, with more playing time he will get a chance to get more touches and therefore hopefully pound the ball inside more. No one can stop him down low on the block and his fade away is one of the hardest shots to defend in the league. Plus, with him inside he can rebound more which the Celtics certainly need.

This is why we brought Rasheed to the Celtics. Sure, we wanted help off the bench, but in the back of our minds we all knew this situation was going to happen at some point. You'd be silly to believe that KG would last a whole season without getting injured. The guy has about 4 million miles on those knees. This is an opportunity for Wallace to show that he can still be a dominant player in this league, and his play will go a long way to getting the Celtics back to the promised land.