Err on the Side of Caution 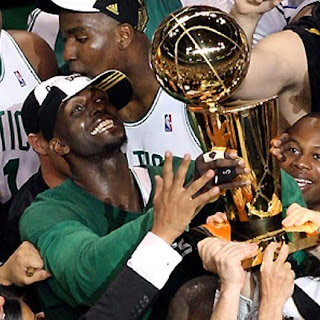 Rest KG and we will see this again in June

Just three weeks ago I was about to write how the Celtics ability to stay healthy was the number one reason they were playing so well.  I'm sure glad I didn't. The injury bug has crippled the Celtics and forced Doc to throw together a makeship lineup and start among others(gulp), Tony Allen and JR Giddens.  Now, TA has been playing pretty well, but seeing Tony Allen at point guard is the stuff nightmares are made of.  While the Celtics do need to keep pace with the Cavs and Magic, they need to make sure they err on the side of caution.

First off, it could be a lot worse.  If this happened in late April or May the Celtics would be done.  As I've said many times, home-court isn't as important as being healthy.  We really need to play it safe with Rondo, Pierce, and especially KG.  I'm completely serious when I say that we should sit KG until the All Star break.  The fact is we can win without KG in the regular season, but we can't in the playoffs.  Big Baby has proved he is more than capable of being a solid player off the bench, and this is the reason we brought Rasheed in here in the first place.  We saw what happened last year with KG, and that should be enough reason to rest him until he is completely ready.


Injuries are the main factor in any sport.  Fortunately for Boston we have enough good players to ride out this injury bug and still be in contention for home-court in the playoffs.  Let's look at this on the positive side.  It will give the bench valuable minutes and get them battle tested for the playoffs.  It also could be a perfect time for Rasheed to step up and play up to his potential.  I keep hearing how smart of a player he is, but if he was so smart why would he jack up three after three when he's 6'11 with a deadly post game? Anyway, it also could be an opportunity for Marquis to get more minutes when he gets back, and maybe even someone like JR Giddens can step up and make an impact.  Well, that's a bit of a stretch, but a man can dream.

In short, it is definitely better to be safe than sorry.  This Celtics team is built for the playoffs. Rest KG, Paul, and Rondo for however long they need to get better, because with everyone healthy no one can beat us.