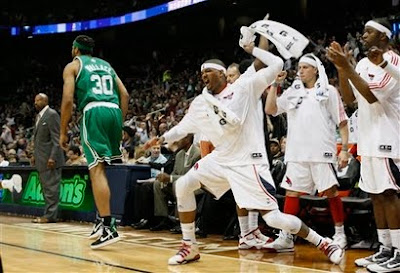 Celtics fans have learned, over the past month in particular, not to become comfortable with any lead, as too many games have just fallen apart at some point in the second half. Tonight the game began falling apart for the Celtics in the second quarter. The Celts had command for most of the first quarter, with Atlanta only able to come close when Paul Pierce, (12 first quarter points) was the only starter on the court during the last three minutes. Just as the quarter was winding down, the C's had a two-point lead, and Jamal Crawford hit a three from just beyond center court at the buzzer. That put the Hawks ahead 23-22, and the tempo of the game was all Atlanta for the remainder of the game.

A few notables tonight: First, where the bench seemed to be empty for the Celtics, it was huge for the Hawks. Crawford had 18 of his 28 points in the first half, and Zaza Pachulia scored 9 points and pestered KG on defense for much of the game. The second quarter saw all five players off the Boston bench, and they did not produce. Second, fast-break points were non-existent for the C's nearly all of the first half, the first ones coming with only about three minutes left in the half. By the end of the game, Atlanta had scored 29 fast-break points compared to Boston's 6. Then there were the technical fouls – another (his 13th) was called on Rasheed Wallace in the second quarter, and in the third quarter there were more to go around. Kendrick Perkins was fouled by Josh Smith (a flagrant foul over his shoulders) and showed his clear frustration at this occurring too often, for which he was handed a T. Hawks coach Mike Woodson, who clearly did not agree with the flagrant call, was also given a T. Toward the end of the third quarter, Pachulia fouled KG, and promptly got a technical as well.

The Celtics brought the game to within one point by the end of the third quarter, with the score 74-73, but could not keep the Hawks to less than a three-point lead in the start of the fourth. Joe Johnson had a strong fourth quarter for Atlanta, scoring 16 of his 27 points and, with about seven minutes left in the game, he helped keep Atlanta going strong. Though there seemed to be a few hopeful moments toward the end of the game, Boston simply could not stop the momentum that Atlanta had all night.

The Hawks were looking to sweep the series, having already beaten the Celtics in the first three contests of the season. Atlanta had not been able to sweep a series against Boston for ten years. That all changed tonight. Though coach Doc Rivers did not show too much concern in his post-game comments, clearly the Celtics have a few things to worry about if things don't turn around before the All-Star break.