Many would say he epitomized being "a step slow" for the association.  Some may remember him for his excellent college career at NC State where along with Rodney Monroe, he formed the "fire and ice" duo.  I tend to remember him as being a reserve point guard for a horrendous Celtics team.

He was drafted by the Magic in the second round of the 1991 draft after setting the NCAA all-time record for assists (this would be broken by Bobby Hurley; although it should be noted Corchiani has a higher average, 8.4 to 7.7).  112 games later and two teams (Bullets and Celts) and he was out of the league.  The 1994 season was his final year in the league and he played 51 games for the Celtics in that campaign.  One stat that jumps out at me is his horrid FT%.  You'd think he'd be excellent from the line but he only shot 68% (26 for 38 for the year).  That Celtics team was really, really bad.  If it's any consolation to him, Monroe's career was even a bigger joke in the NBA, lasting only one season with Atlanta.
Corchiani would also play overseas in Germany, Turkey, Italy and Spain. 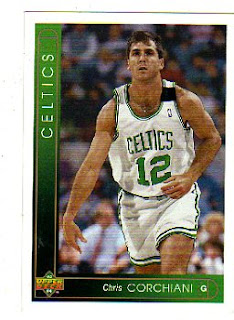 Also of note is his adopted Turkish son, Kevin Totti Corchiani (who's only 13 years younger than Chris, weird).  He's apparently a movie producer and produced a movie called Broken Angel, the story of a girl who comes from Turkey in the 1980s to America.  Sounds incredibly boring.  I guess his American Dad's hoops game didn't turn him on to sports.  Imagine if he had Turkoglu's drive.  He could've become the Chris Corchiani of Turkey, just like Hedo is the Michael Jordan of Turkey.

Addendum 2/18/12: Watch as Corchiani and former Celtic Tom Gugliotta are ejected from an NC State game as spectators.