The Tiger Woods scandal: A Microcosm of Society 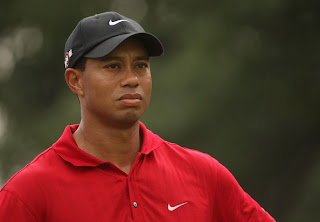 During the last week or so every major news network in the country has been covering the Tiger Woods scandal like it was the presidential election. The scandal of course, is Tiger's involvement with at least one, and possibly many other women outside of his marriage. The reaction to this story has been mixed, especially between males and females. Not surprisingly females seem to have harsher criticism for Woods than males.

I think I fall somewhere in between total disgust and understanding. On one hand, though I don't condone it, I can see the temptation a person like Tiger Woods would have to venture outside his marriage. On the other hand, the fact that not only was he married, but he cheated on his wife while she was pregnant makes me have no sympathy for the guy.

The fact is this isn't the first nor will it be the last time an athlete cheats on his wife. So I ask you, why is this story bigger than the war in Afghanistan and the Health Care debate right now in America? The logical reason is that Tiger Woods is the most famous athlete in the world. Sure, that is part of it, but not the real reason. Michael Jordan had about 6 girlfriends on the side and no one really seemed to care.

In my opinion the real reasons this story is so big is two-fold. One is the death of journalism. There is no such thing as news journalism anymore. TMZ has replaced World News Tonight as Americans primary media source. We'd rather watch The Real World Cancun than our Nightly News. Sex has always sold, but never to this extent.
With the internet and the 24 hour news cycle, there is no time to write a well thought out article, because the next story will have already happened. This isn't the media's fault, it is the consumer's. You want real news start watching real news. Remember the media is a business just like anything else.

Second is perception. Tiger Woods has always kept his private life to himself, so we judged him as a person by what we saw on the golf course. 99.9% of us have never spoken or seen Tiger Woods in person. We assume he is a certain way because he has never gotten in trouble and hugs his wife and kids after every golf tournament. We see his carefully crafted image and assume that is just how he is. The difference with him and Jordan is that Jordan never pretended to be a family man.

This story shocked me at first, simply because Tiger has had such a spotless past. The real losers in all this are not Tiger or his wife, but his two small children. Tiger should never have gotten married and Elin should have been weary that a person of Tiger's stature might cheat. I'm sorry but if you are a spouse of a famous athlete you are in denial if you don't think your husband might cheat on you. I think there really is something to be said for professional athletes to wait until their playing careers are over to get married, because this seems to happen way too much.

Also, for all those holier than thou people out there saying they would never do what Tiger did, I will say this to you. Most of us could never imagine what it is like to be Tiger Woods. While there is no defense to what he did, don't try to say you wouldn't do something when you really couldn't comprehend the situation. The real issue here is that we as a society care so much about this situation, when we really shouldn't be concerning ourselves in the private lives of other's. Thanks for reading everyone!