Good news, Sheed's back down to 9 Techs as you can see here. 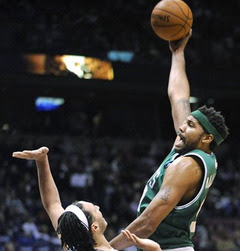 After the NBA decided to impose no additional fines or suspension following his outburst ( and ejection) from Friday's loss to Philadelphia, CSNNE.com has learned that one of Wallace's technical fouls has been rescinded.

The one in question came on Nov. 29 at Miami.

Near the end of the first quarter, Wallace made a shot in which he felt he was fouled. After the made basket, he yelled, 'And one!'

However, Wallace acknowledged at the time that Salvatore told him that he would talk to the league to try and have the technical foul rescinded.


I'll never get the whole rescinded thing.  What if Friday's T's were rescinded- does the score get adjusted and the Celtics get the win?