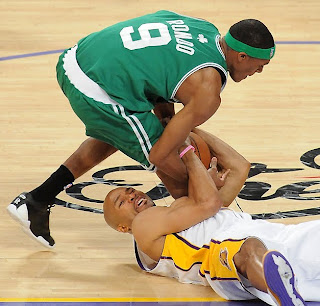 I always say you can't really judge an NBA team until after Christmas. That's why when the Celtics started off a little slow, I wasn't too concerned.  After this recent 10 game win streak there is certainly a lot to be excited about as Celtics fans.  With last night's win and the subsequent Lakers loss, the Celtics now own the best record in the league.  I think it's now appropriate to debate whether the Celtics or Lakers should be the favorite to win the title in June.

Look, I'm a diehard Celtics fan, so obviously I'm going to be a little biased.  However, I will try to be as objective as I can. Both teams are the class of their conferences and I would be surprised if they didn't meet in the Finals.  The Lakers are playing with an ailing Kobe Bryant and have played over half their season without Pau Gasol.  With those two healthy and a sober Ron Artest they will be tough for anyone to beat.

On the other side, the Celtics have played the entire season without  Big Baby Davis and are now dealing with the Marquis Daniels injury.Yet they have still managed to go 19-4. The progression of Perk and Rondo has given the Celtics the best starting 5 in the league. As far as the benches  go, Rasheed is finally realizing he is 6'11 and starting to go inside more. The rest of the bench has been inconsistent mostly because their minutes have been inconsistent. Doc needs to work on his time management.
In addition, the Celtics have been amazing on the road, winning an amazing 11 of  12 road games thus far.  On the other side the Lakers have basically played all their games at home. It should be interesting to see how the Lakers play away from the Staples Center.

Injuries are going to be huge for both these teams. The Celtics are better equipped to handle an injury to one of their stars because they have guys that can step in and take their place.  The Celtics depth, especially when Big Baby returns, could be a huge factor if these two teams meet in the Finals.  The Lakers are long in the front court, so Boston will really need to continue to improve on the boards to be able to have a shot against them.

The single biggest edge Boston has over the Lakers is at the point guard position. Derek Fisher has been a solid player for years and is a clutch shooter, but Rondo will own him in a 7 game series. Whether or not the Lakers will put someone else on him remains to be seen.  Also, even with the addition of Artest, the Lakers are still a soft team in my opinion. The Celtics on the other hand are probably the toughest, most physical team in the league. As long as the Lakers have Vujacic on the team I will pick the Celtics to beat them everytime

Overall, I would give a slight edge to Boston at this point in the season simply because of their road record.  It's not the Lakers fault they've only played 5 road games,  but the most important mark of a champion is how you play away from home.  Kobe Bryant is still the most dangerous player in the game, but the Celtics have beat him before and can do it again

I think the Celtics have a huge advantage at the end of games as well.  Most teams only have one guy they trust to take the last shot, but I would trust Pierce, Ray, or KG at the end of a game because they have all delivered before. Pau Gasol is actually the player I worry about most on the Lakers. However, with a healthy Garnett the Celtics are one of the only teams in the league that can match up with them at that position. Also, with the addition of Rasheed and the continued progression of Perk the Celtics have the horses down low to contain him.  Even though it would be easier not to have to go through the Lakers to win another title, I would like nothing more than seeing Kobe walking off the court with a loss in June.