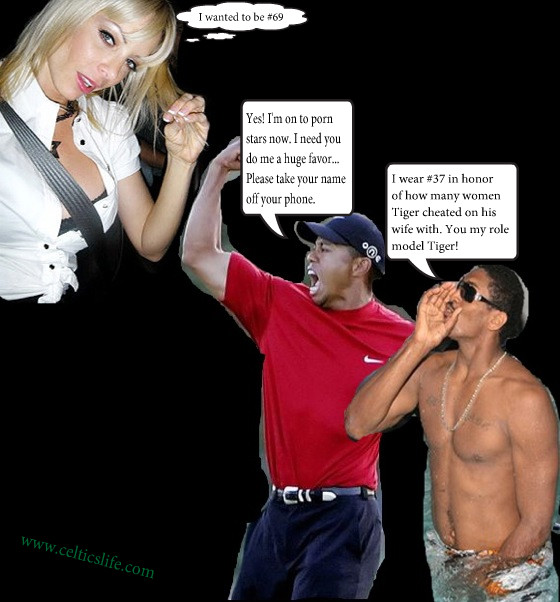 Ron Artest is a blogger's dream.  The guy constantly comes out with outrageous statements that make him look like an idiot.  The latest is his proclamation that Tiger Woods is a "perfect role model" and someone he wants his kids to look up to.  I don't know if he is trying to get attention or if he really is just an idiot, because this statement is ludicrous.  No matter what you think about the Tiger Woods scandal, I think we could all agree that he isn't the perfect role model for young kids.  That is unless you want your kids to grow up to be womanizers who have sex with porn stars and waitresses from the local diner while their wives are pregnant.

On this whole issue of letting people have their privacy, it doesn't hold true to Woods. His right to privacy ended when he became the face of about 100 corporations and plastered on ads everywhere.  It comes with the territory.  Sure, a ton of men have done what Tiger Woods did and they didn't get the backlash. But they don't have their face on Gatorade bottles either.

Back to Artest, I'm telling you this guy is a ticking time bomb.  This whole Lakers team is extremely unlikeable.  The only guy I like is Derek Fisher, and even he gets on my nerves.  They also aren't as great as the talking heads from the media would make you think they are. Kobe Bryant is a stud, but who else scares you in crunch time, besides maybe Fisher? Gasol is soft, Lamar is always thinking about his next candy fix, and Vujacic is more concerned with how his hair looks.

Now, I don't want to say the Lakers have been lucky so far this season, because a lot of games in the NBA come down to 1 or 2 shots.  However, if you keep having to win games in OT or with game winning shots, that eventually comes back to haunt you.  Like I said before, let's see how the Lakers do when they actually have to travel a bit.

Ron Artest truly is the gift that keeps on giving.  Being a Celtics fan, I've always disliked the Lakers, but it is to a whole other level now.  Here's hoping Artest continues to preach his idiotic beliefs for the world to hear.

Shout out to JR for the great PhotoShop job!