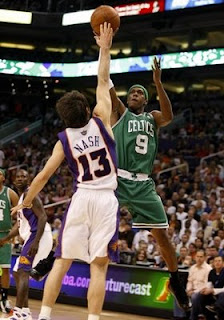 Steve Nash is my favorite non-Celtics player in the NBA, and not just because he is putting up a ton of points for me in my fantasy basketball league. I've always loved the way he plays the game, and the way he conducts himself on and off the court. I know people who have met him in person, and say he is as down to earth and chill as advertised. Tonight's matchup against the Suns is intriguing for many reasons, but the matchup between Rondo and Nash is the one I'm most looking forward to.

How crazy is it that these two could have been teammates? Rondo was chosen 21st by the Suns back in 2006, and would have been a perfect complement to Nash. Thankfully the Celtics were the beneficiaries of this trade. Rajon always seems to play his best against him. As great as he is on the offensive end, Nash has trouble guarding quicker guards, and Rondo can drive the ball at will against him. He always does a good job defensively against Nash, using his long arms and on the ball pressure defense to disrupt him on the offensive end.

Nash has had a great year so far, defying his critics who said he was too old. This is a great test for Rondo and the Celtics after a subpar effort against a hungry Minnesota team. If they win tonight they have the hapless Nets tomorrow, then 3 days until another marquee point guard in Deron Williams comes to town. This is the toughest game of the year so far for the Celtics, but I think Rondo's defense on Nash will be the difference in the game. Go Celtics!