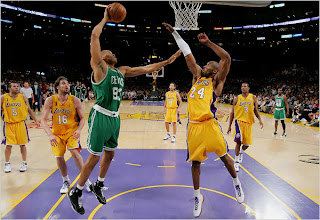 When you think of the greatest Celtics games in the last, lets say, 30 years, many come to the Coaches mind. You have so many to choose from during the Bird era that it makes your head hurt more than listening to the oppositions broadcasters on the NBA package, but after the Legend retired his weapons in 1992 what are we left with? The Pierce 4th quarter against the Nets in 2002 always comes to mind as do numerous playoff games from 2008 and 2009 but nothing perhaps ever can match up with the Game 4 comeback in the 2008 finals against the Lakers.

Like certain events in life we all remember where we were. For game 4 I was at the Bonnaroo Music festival in Tennessee (yes, Coach checked before getting on the RV if the game would be shown live) The game was shown in a monster tent that seated a good 300-400 people. After spending the first half next to two of the most ignorant Laker fans I have ever been around I stood up, boldly guaranteed the Celtics were going to come back and win and then changed my seat (Coaches and ball players are so suspicious about seats and karma, it is a sickness) 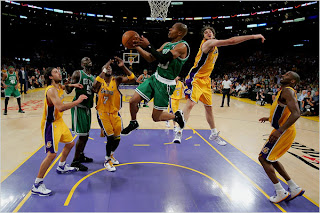 As the Celtics cut the lead under 20 and the momentum started to shift there was a spirit in that tent that I will never ever forget. Coach happened to have his green towel with him and when that lead got below 15 I turned into a modern day M.L. Carr along with three other fans and we began leading defense chants and the whole place was rockin. The connection in my heart to the Celtics was never more apparent than it was during that game.

When Eddie House put the Celtics up for good with just over four minutes to go you knew it was over. The momentum, the will of the Celtics and the pathetic LA crowd all combined to produce one of the greatest wins in Celtic history. Pierce, Ray, House, Posey, KG, TA and PJ Brown (known in my circle as '93 mafia) played all the minutes and left left it all out there.

So sit back, sip your morning coffee and smile as this is the way to start a Friday before a long weekend.

The Coach
As a former high school coach and educator I have always had a passion to create whether it be with a camera or the written word. From writing specialty pieces and reviews to now making my own films I love producing new content.
Newer
Older