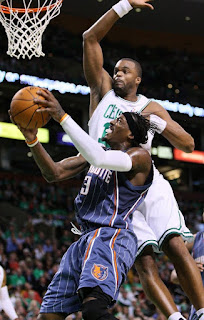 He chose number 13 to go under the Celtics jersey. Not a common fit for a big man like him. They called him "The Landlord" yet nobody could really see where he came from.

They said he was once a top 5 draft pick. They also told us he was a star at Duke. And still all we fans knew from him is that he was a shadow under the stardom of his wife.

He came in silently, signing for a minimum contract, for the minimum length, with the hope of a 10th-15th spot in our team. He was the fifth big man and it seemed impossible for him to fight for minutes this year.

His press conference was shared with the man of the big smile, Glen Davis. Like lights and shadows, he would once again choose to let another get the big expectations and his voice would hardly be noticed.

His message is not spoken but written. Once at Duke he wrote the keys for a game on the board. "Emotion, deny, be mature, follow me..." In the same manner he signed his contract for our Boston Celtics.

But Shelden Williams's shyness evaporates when he is on the court. Somewhere in Duke they forged a giant rock with a huge heart and an obsession: to make the ball go to the right direction and get it back on the offense. He defends the basket, his land has a limit and he proudly prevents any visitors from daring to score over him. His whole mission then is to get the rebound, and his long arms always manage to grab it no matter how big or skilled his oponents may be.

Maybe it is because he knows the shadows, and in silence only he can know where the ball can go, as a silent communication between him and the ball. Shelden rebounds, Shelden blocks...once again he is letting his work speak for him.

In just some games, the new Celtics forward is showing that he can play this game. It just takes some observation, some silence and calm to start glimpsing the real Shelden. In silence he gets a double-double, and in silence he will go back home. Calm, in peace.

And many years from now, when he decides to leave the noisy crowds and the court lights, we will all speak of how once, a man coming out of the shadows would speak his game to fans in a different way. Rebounds, defense, teamwork, hustle and pride.

Welcome to the Celtics, Shelden. Hope you stay here for a long time.