The Big Ticket is Back 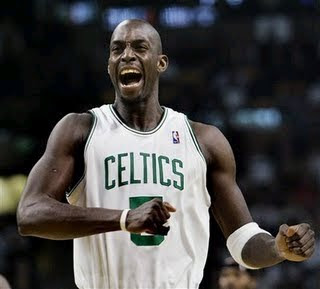 A couple weeks ago I wrote about how Rajon Rondo was the most indispensable player on the Celtics.  I still feel that way, but the fact is there is no replacement for Kevin Garnett. You could go get Derrick Rose or Chris Paul and the Celtics would be as good, if not better. But there is no one in the league that brings what KG brings.

Look, KG is not as explosive as he used to be, and it still remains to be seen how he will come back from his injury.  However, the intangibles he posseses are unlike anyone else. Saying that a person has all the "intangibles" is about as cliche as you can get, but in this case it holds true.  Garnett's attitude and intensity are unmatched in the NBA, and it reverberates through the entire Celtics team.  Just look at Kendrick Perkins. Perk has had a perpetual scowl on his face since KG got here. When Garnett went out for the playoffs last year, you could tell the attitude for the Celtics changed.  Sure, they were still the champions, but teams didn't fear them.

Garnett has looked like his old self in the preseason so far.  In some early season clips it looked like he still had a limp, but that looks to be mostly gone now.  What no one has mentioned is that maybe the time off has made Garnett even better than he was.  The guy has logged a ton of miles since he first came in the NBA. Maybe this rest was actually a blessing in disguise.

All I know is with KG, Perk, and Rasheed on the front line opposing teams should be frightened.  Can you imagine seeing them all walk into a bar in Boston together.  I don't know if that or seeing Mike Tyson in a back alley during his heyday would be scarier.

KG is my favorite player to watch in the NBA hands down, though Brian Scalabrini in a head band is a close second.  The enthusiasm and fire he brings on every possesion is amazing to watch.  I just wish he had come to Boston sooner.