What the Hell Happened to...Derek Strong?

This is actually a 2009 photo of Derek
A 6'9 forward from Xavier....James Posey...I mean Aaron Williams...I mean Brian Grant...I mean Tyrone Hill...I really mean Derek Strong.
Ok so Posey's prob 6'7 and Strong may have been 6'8 but you get my drift.  Former Xavier Musketeer Basketball Players seem to be around the same height.  In this week's segment of "What the Hell Happened To" we look back on the illustrious career of one Derek Strong.
Strong was picked 47th overall in the 1990 draft and actually stuck around for 10 seasons, a big credit to his work ethic.  He had a cup of coffee with the C's in 1995 when they made the playoffs and nearly upset the Magic before closing down Boston Garden.  His best season came with the Magic in 1998 when he averaged 12 ppg.
Interestingly enough, he has a passion for NASCAR, which would make him the second NBA player I know of who was interested in driving around in circles at high speeds.  He has turned his passion into a second career and now heads up Strong Racing.  In fact, here's a picture from their opening party back in June: 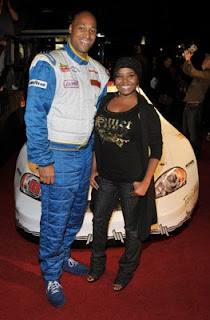 Good for Derek Strong.  He also apparently does a lot in supporting charities including The Music City Motorsports Institute, a non-profit associated with Strong Racing that seeks to motivate and inspire students to achieve academic success with an educational platform of learning, discovery and fun in the motor sports industry (yes I literally copied and pasted that from Wikipedia).

According to Basketball Reference he made more than $16 million in his career and he seems to be enjoying the next stage of his life.   One final image of Derek Strong of him in the driver's seat: