M.L. Carr has a terrible reputation as a Celtics GM and coach. He took over for Dave Gavitt at a tough time in Celtics History. The Big 3 were gone and Reggie Lewis's death had rocked the team. Carr came out with guns blazing and signed Dominique Wilkins and Pervis Ellison and would later sign himself a year later to coach the team. Question is does M.L. Carr deserve the poor reputation he receives? Following are a few reasons that show that maybe he wasn't that bad.

Fresh on the job, with M.L.'s first draft pick he took Eric Montross out of UNC. While Montross didn't have a great career by any stretch, as a center he was an asset (especially at that time when the whole "You can't teach height" thing was in its hay day come draft time) and Carr would later use him in a very slick trade. The next year Carr took Eric Williams. The pick drew skeptics, but Eric Williams proved to be an NBA caliber starting forward. Besides these two picks, Carr also signed a bunch of Free Agents. Many were veterans and he was criticized for keeping the C's in the NBA mediocrity limbo. Carr would later say he was sort of forced to make those moves, because the C's were still reeling from the loss of Reggie and that they weren't ready to hit rock bottom yet. Not sure I understood that process of thinking, but Carr did have to work under ThanksDad. Carr did make one solid unheralded FA signing in the undrafted David Wesley. Wesley would develop into a quality NBA caliber guard.

Approaching Carr's third draft, experts labeled the draft a 6 player one. C's had the 9th pick. In order to get one of the top 6 (Iverson, Camby, Marbury, Ray Allen, Shareef Abdur Raheem, or Antoine Walker, the C's were going to have to be bold. Carr traded 2nd year center Eric Montross and the 9th pick (Mavs took Samaki Walker) for the 6th pick AND the Mavs first rounder unrestricted the following year. Carr picked up Antoine Walker who hate him or love him was the obvious choice. Finally that year the C's went into full rebuilding stage and finished with the worst record in the league leading up to the Tim Duncan draft. If there was ever a year to go the rebuilding route and whether on purpose or by accident, Carr had positioned the C's well. 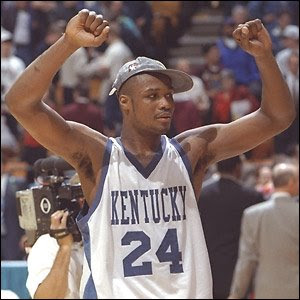 The Mavs as predicted stunk that year too and finished with the 3rd worst record. Combined with the C's record, this gave the C's the best opportunity to get the #1 pick that any team has ever had since the lottery was introduced. C's also had a great chance to add another top 5 player in the draft and had the cap flexibility to surround Duncan with a quality FA or two.

As everyone knows, Carr stepped aside at this time and Pitino was brought in. C's struck out in the lottery and received picks number 3 and 5. But let's say they had gotten Duncan and either TMac or Billups. If Carr's three years led to a team of Duncan, Toine, Eric Williams, TMac, and Wesley, how would his GM legacy look then? Or even if Pitino just picked better at number 3 and 5 and took Billups (and kept him) and TMac. Billups, TMac, Eric Williams and Toine would have been a solid foursome. Hindsight is 20/20, but even without the Duncan prize, Carr left the C's and Pitino with a decent amount to work with. Pitino would go on to draft Billups, but trade him, and pick Ron Mercer over TMac. Pitino would also let Wesley and Rick Fox go, not sign a solid FA with that cap space, but pick up Travis Knight and Chris Mills instead. But what Pitino did with the opportunities that Carr left, should not be used against M.L.

So in conclusion was Carr a great GM or coach? No. Did he set the franchise years back though? No to that as well. Did he make horrible draft picks? Nope. Did he ruin the C's cap for years to come? No. Did he actually make one of the C's all time better trades? Yes. Did he take some hits for the team during the Thanks Dad years? Yes. Was M.L. Carr that bad? I have to say no. Thoughts?