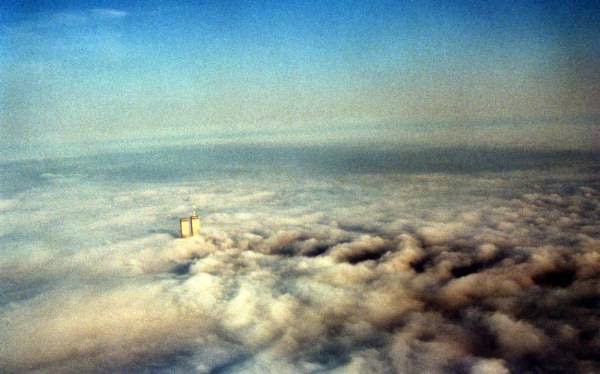 I had turned 23 about 5 weeks earlier and had finally moved out of my parents’ place. I had officially moved into my new apartment in on Thursday, September 6th.

I worked in Long Island and would take the to work everyday, still in my beat-up Green Ford Taurus that I had from the previous year in college. I had had the job out there since May and every single morning I drove out there and was on that bridge I’d look out at 2 things in the skyline: the Empire State Building first, then the . That was the order in which they appeared to me.  I had always been in awe of all 3 buildings.


I remember that morning like it was yesterday. My job began 8:30 so I crossed the bridge around 8 am, before any of the events would take place. I recall looking out at the towers as always, the sun spectacularly hitting them, their iridescence shining as beautifully as ever from the September sun. It was the last time I’d see them standing.

When the whole thing happened at work our phones went out just like everyone else’s in the area. My company was small, about 6 people, and I was the last one to leave. I had made an attempt around 1pm but since I didn’t know that well, wound up driving in a circle back to my office. It seemed everywhere was blocked, and the traffic was at a standstill. This was in Lake Success which is about 18 miles from , but with the congestion on the streets you’d think the incident happened a few blocks away.

I went back to my desk at work and fell asleep sitting there. I was tuning everything out. I woke up around 5 and remember leaving again to make the effort to go home. When I left my building there was a guy, named , towards the front of my office who worked for another company. He was sitting there crying. I had nothing to say.

Traffic was still crazy but after asking a few NYPD cops along the way, I managed to find an entrance onto the in . The blackness of the sky was all-encompassing as I entered onto the parkway.  It's as if the entire cloud of smoke and debris from lower Manhattan drifted to Brooklyn and now Queens, and I was falling victim to its mightiness.

I remember getting back onto the , not seeing very many cars then. One car I recall, had a guy with thick glasses driving.  He kept staring out at Lower Manhattan barely paying attention to the road.  He's etched in my mind for eternity.  It's funny how you remember the random details.

I passed him on the right and glanced over my left to see the destruction first hand. The bridge was free that day, the blocks at the toll were up, trying to make traffic move as quickly as possible.

My life had changed forever. I used to really like September.  In fact it was my absolute favorite time of the year.  The end of summer, nights still warm with a small twinge of autumn and cooler, crisper air coming about once the sun set.  But it's never been the same since then.  Now when September comes around I have increased anxiety and fear.  It still pains me every, single time when I look out at the skyline and see the sticking out alone. It’s as if it lost its two brothers downtown. I’m pained and enraged.  And there's nothing I can do about it.

Today I still can’t help but look up at every airplane flying low, scared to see what may happen. That never happened until that day. I wonder if it’ll ever go back to being the way it was.